Entertainment critic and artist manager Mr. Logic has stated that he strongly believes Castro is alive and some people know about it.

According to Mr. Logic, some utterances from the disappeared musician’s family members and some close friends in the music industry suggest the Hiplife/ Highlife singer is alive and they know his whereabouts.

Recall Castro alongside his female friend Janet Bandu allegedly disappeared when they went for a jet ski ride with former Black Stars striker and captain Asamoah Gyan on April 7, 2014 at the Ada Beach Resort.

It was reported that the two may have drowned when Castro allegedly tried to save his female friend from drowning after she fell off the jet ski.

Over the weekend, Hiplife/ Highlife musician Kofi Kinaata in an interview with Graphic Showbiz stated there is no need for the State to declare the ‘Toffee’ hitmaker officially dead if he doesn’t appear in the next two days as it will be seven years since the incident happened at Ada.

Mr. Logic this was making submissions on the ‘Day Break Hitz’ show on Hitz FM hosted by Andy Dosty.

Commenting on the statement made by Kofi Kinaata stated he personally believed some people who were closer with Castro know his whereabouts if they still insist he’s alive.

Ejura disturbances: Five personalities at the center of the incident

Tue Jul 6 , 2021
• The death of activist Ibrahim Mohammed has taken a national dimension • The president has ordered a probe into the death and that of two others who were killed whiles demanding justice • GhanaWeb looks at five personalities who have become central in the death and its aftermath The […] 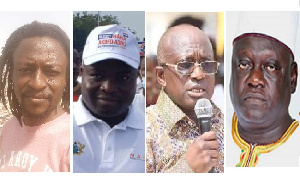