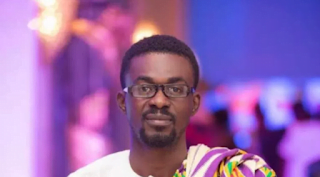 The entrepreneur who was among the distraught personalities after news of the tragic loss surfaced has made a shocking revelation on his social media page which suggests the young star had issues with her management.

According to the Zylofon boss, he and Ebony had reached an agreement last Tuesday on the terms of helping her pay him (Bullet) for her ‘bail out’ which goes to suggest that she had run to him for some sort of help to break free from her manager before her demise.

He wrote; ‘’we had a fruitful meeting and reached an agreement last Tuesday. ‘’please help me pay him for my bail out I want to be free’’ I hope you’re free now and find absolute peace in the bossom of the almighty God. Let’s pay critical attention to our females artistes’’.

It will be recalled that Ebony’s manager, bullet in a recent interview with Joy news stated emphatically that he has the “button” to destroy Ebony’s career which brought about suspicions that he had problems with the young artiste.
“Ebony can never be ungrateful because I made her. I have the button to press to go up or to come down. If she becomes ungrateful, it is her own matter.” This was the exact words of Bullet, Ebony’s manager.

Unfortunately, Ebony Reigns died in a fatal car accident on the Sunyani-Kumasi road Thursday evening whilst returning to Accra after visiting her mum in the Brong Ahafo regional capital.
Two other people, a military officer and a friend of the singer also died in the accident whilst the driver of the jeep in which they were travelling is undergoing treatment at the Bechem Government Hospital. 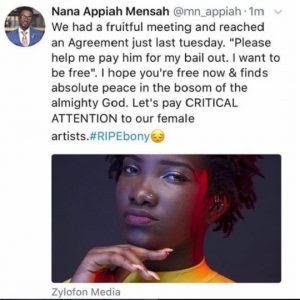