The Liverpool striker comforted a young boy who crashed into a lamppost after trying to run alongside the footballer’s car. 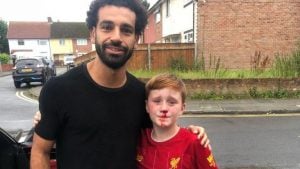 Why you can trust Sky News
Many sports fans would do anything to meet their heroes, but one football mad 11-year-old boy accidentally ended up with a bloody nose in his quest to get a glimpse of Liverpool legend Mo Salah.

Louis Fowler crashed into a lamp post as he and his brother Isaac, 10, ran to keep up with the striker’s car and fell to the floor with a suspected broken nose on Saturday.

The footballer spotted that his young fan had got into difficulty, so circled back to check Louis was okay.

Louis’ stepfather, Joe Cooper, told Sky News: “Whilst [we were] ringing an ambulance we saw Mo driving into the close having spotted Louis and following back to the close to check they were both okay.

“Mo was very apologetic and caring and was really compassionate towards the boys and made them feel so much better.”

Salah posed for a photo with each brother before young Louis was whisked off to be checked over at hospital.

More from UK
Teen dies in hospital after getting into difficulty in the sea in Clacton
Boy who boarded bus alone in dressing gown reunited with his family
Suspected car thief runs over police officer in ‘sickening’ attack
Facebook users warned mocking criminal’s hair could be illegal
Decay and decline: Seaside towns desperate for investment
Boy, nine, found on Brighton beach at 2am in high winds
The boys’ father said Louis and Isaac have spent their summer holidays hanging outside Melwood, Liverpool’s training ground, “desperate to meet the heroes and get photos with them”.

Both young boys “idolise” Salah, their father says, adding his son told him he would “do it all over again to meet his hero” – despite hospital staff warning he may have to have his nose reset.

Mr Cooper had a message for the football star, saying: “We wanted to say thank you to him from the bottom of our hearts as he made both of them feel much better.”

He added: “Mo really is a top, top man. He is a global superstar and had no need to stop today, we’re just so thankful he did.”

Sun Aug 11 , 2019
Kano Pillars came from behind to inflict a defeat on the Ghana Premier League heavyweights in the first leg tie of the CAF Champions League on Saturday. Asante Kotoko suffered a painful 3-2 away defeat to Kano Pillars at the Saani Abaacha Sports Stadium in Kano. The Nigerian club started […] 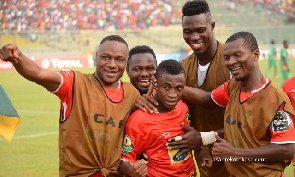