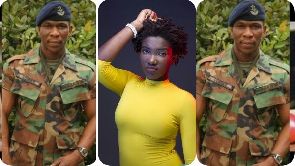 The family of Ebony’s Military bodyguard, Lance Corporal Francis Atsu Vondee, are threatening to hand over the issues surrounding his death to the famous deity in the Volta Region, Nogokpo shrine.Francis Atsu Vondee was involved in a car accident with dancehall artiste Ebony and two others and died at the Bechem Government Hospital on Thursday, February,08,2018.According to a relative identified as Ian McWills, they are considering the intervention of the Nogokpo shrine or any powerful deity in the Volta Region to haunt whoever contracted him to guard the late dancehall artiste, Ebony Reigns.According to reports by MyNewsgh, Mr. McWills says the family believes a superior officer in the Military may have ordered the soldier to provide protection to the musician which led to his death insisting that friends and the entire Adidome township want the said individual unmasked.He threatened that family members of the unnamed person will start to die in chains if he or she fails to own up as being the authority behind Lance Corporal Vondee Atsu working as a personal bodyguard to the musician.
“Who’s the big man who feels Ebony needs protection and sent our Atsu to die like a fowl? We the family, friends and the entire Adidome township want to know who ordered atsu. Atsu was a discipline guy.They now want to make it look like atsu was a bad boy. Start speaking the truth. I smell a rat. Atsu will avenge his death. we will look 4 the sender.” Mafi Kutupong,Melemewowoe be Yenormewadui”. You want this poor soul face the marshal court? hmmmm. The big man who sent Atsu to protect Ebony speak b4 ur families start dying same death. I am very bitter and serious. Don’t think dead men don’t talk. Atsu will be buried like ‘ametsivume”. Who sent Atsu Francis Vondee to protect Ebony?
Ebony paid for a sacrifice she made – Prophet claims
Source: ghanacrusader.com
Facebook
Twitter
Pinterest
LinkedIn