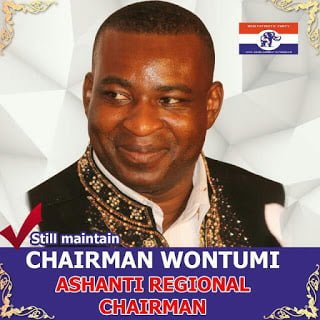 WONTUMI IS NEVER AN ICON FOR NPP’S VICTORY AS HE BOASTS- REV. MINISTER REVEALS:

Founder and leader of the Soldiers of Christ Prayer Group of all Churches, Apostle Dirl Airl King Mashal has revealed that the Ashanti regional Chairman of the ruling New Patriotic Party (NPP) should never boast of himself as the winning icon for the party both in the Ashanti region and national level.

According to the outspoken minister of God, Wontumi has rather caused more harm than good to the party than what people think. He said most MCEs/DCEs cannot work to perfection due to Wontumi’s selfish interest and corrupt act during their appointment. “NPP will get disappointed in 2020 if they rely on Wontumi”, he disclosed. He said Wontumi denied the rightful personalities hence giving the positions to incompetent people under the influence of materials in hand and in cash gained from such people.

He said Wontumi should humble himself even though he plays his possible part in the NPP, but God doesn’t want the way he does always glorify himself for NPP’S victory. He said God loves Wontumi and that’s why He has been revealing secrets about him to such great men of God.