• DCOP Opara Addo has named Captain (Rtd.) Budu Koomson as one of the people who wants him out of office.

• He disclosed President Akufo-Addo has directed him to remain at post.

• Earlier, alleged members of the pro-NPP vigilante group, Delta Force, handcuffed DCOP Opare Addo and dragged him out of office.

Some alleged members of the NPP vigilante group, Delta Force, on Tuesday, May 11, at about 5 pm went to the officer of the Ashanti Regional Security Liaison Officer and handcuffed him, insisting that he should vacate his position, DCOP Opare Addo told the media.

According to DCOP Opare Addo, the Delta Force arrived in his office unannounced, claiming to be personnel from the National Security Secretariat who had been ordered to come and take him to Accra.

He disclosed: “They came to the office about 5 pm and said that they’ve been directed to bring me to the National Security Coordinator. I said I won’t go so they handcuffed me, pushed me here and there, pointed AK 47 at me.

“They came and assaulted me, pointing AK 47 at me and the likes, hitting me, even when I was going to urinate one of the boys followed me and said he was following me to the toilet, I said what do you mean?

Bawumia’s campaign team ‘fires’ back at Rev Owusu-Bempah
“He said but you’re a man, I am also a man, I can look at it because you can also look at mine. I said why! Am I a baby or child? So, I am not going to look at this without taking any action.”

After the incident, DCOP Opare Addo said he came to Accra to meet the president but he was preparing to travel so he could not discuss the issue in detail with him but the president asked him to go back and work because he is not ready to replace him.

“I went to the office the next [after the incidence] but I am not in Kumasi now. I must be seen in the office because His Excellency the President when I went to his office, he told me to go and work because he wasn’t bringing anybody there. At the time, he said I should go and work and I’ll hear from him and that is exactly what I am going to do,” DCOP Opare Addo explained to Joy News on Tuesday, May 18, 2021.

The former Deputy Commissioner of Police said his visit to the Presidency was after he heard rumours that Captain (Rtd) Budu Koomson and some alleged members of the NPP’s Delta Force were trying to remove him from office and impose a different person on him as the Ashanti Regional security liaison officer.

“I wanted to see him [the President] on Friday, but he was very busy; I understood him, he was travelling on Sunday so he had to do a lot of things himself and I never bothered him with the issue there.

“I saw him when I heard that there were rumours that Budu Koomson and the other guys [Delta Force] I mentioned were trying to impose somebody on me at the time. I called Budu Koomson himself and told him about this and I’ll talk about that later,” DCOP Opare Addo said.

According to Major General Adu Amanfo (rtd), the account as narrated by Deputy Commissioner of Police (DCOP) Opare Addo does not reflect the true happenings on the grounds.

He told journalists in Accra that his team who were deployed from Accra to make sure DCOP Opare Addo got out of office were rather handcuffed by officers of the Ashanti Regional Police Command who had been called by the DCOP Opare to handle the matter.

He claims the tenure of DCOP Opare Addo had expired but he has refused to vacate his post, adding that his contract was not renewed as a result of “non-performance and criminality”.

“The bottom line of all of this is that Opare Addo had a contract with National Security and for four years he was the regional liaison for the National Security. His term of the contract has expired. It was not renewed because of non-performance and his own criminal activities.”

“He had no locus to be in the office because a new officer had been appointed, and he should have handed over to the officer, and he says he won’t hand over. So that is why a team was sent from Accra to go and mitigate and facilitate the handing and takeover process,” he added.

Major General Adu Amanfo (Rtd.) said a committee has been instituted to probe the “vicious” allegations raised by the embattled Regional Security Coordinator.

When asked for further clarity on his claims of criminality against DCOP Opare Addo, the acting National Security Coordinator said those issues are under investigation.

“I will say most of these things are vicious, and I say so because I am very experienced in the military. I have served 37 years, being an Ambassador to Liberia, Mali, so I have seen it all. Most of these allegations are vicious, so we need to investigate them before I can make any serious statement. These issues are being investigated,” he stressed.

Wed May 19 , 2021
The convict is a 46-year-old mechanic identified as Antaru Issaka His brakes reportedly failed him while he was driving around the President’s Nima residence on May 15, 2021 He rammed the Mercedes Benz into the fence wall of the President’s wall to avoid running into other vehicles and pedestrians A […] 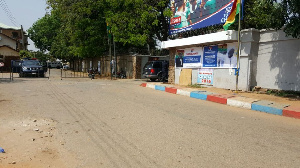