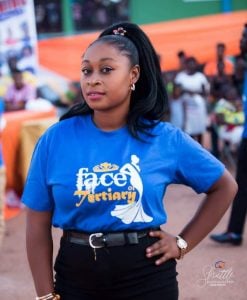 A contestant of Face of Tertiary, a beauty pageant in Asante Akyem North quits because of sexual harassment by some of the organizers which she thinks defeats the main aim of the beauty pageant as to curbing teenage pregnancy in the district.

According to Nana Hemaa, who was supposed to be 8th Contestant, she has been harassed severally by some of the organizers whom she refused to mention their names.

She also recounted how the organisers have decided to treat her unfairly after she resisted their sexual harassment.

According to her, coupons which were meant to be given to all the contestants at the same time so they can sell it out for votes were given to some of the contestants 2weeks earlier and when she confronted the organisers, they told her they have problems with her coupon and took extra 5days before they could release her coupons to her.

This in her estimation are unfair means been used by the organisers to get their favorites ahead of her in the competition.

In a post on her facebook page, she stated there is something going on in the competition and therefore decided to quit. 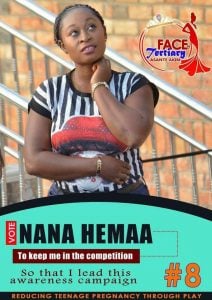 “Hello guys tanks for your time and the ears u have for me. I am no more part of the competition anymore. There is something going on which I am not praised with it. So I hv to quit myself. Thank u for your support and hard work. Bye.” 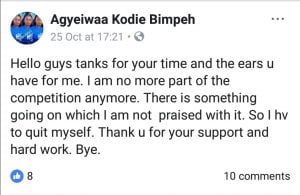 Government's deliberately delaying resourcing MASLOC; and will have negative effect on NPP

Sun Oct 28 , 2018
The NPP prepares the grounds for good governance in our manifesto, and it’s usually the leader and President, if we’re in power who superintendents over the implementation of our manifesto programmes. Amongst others is MASLOC, introduced by the Party to provide some amount of leverage to the poor and indigent […]