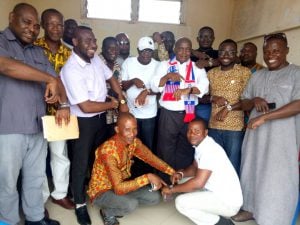 Today, Mr Stephen Ayesu Ntim was at Cape Coast North Constituency with his message of hope for the ruling New Patriotic Party.

The Incoming National Chairman touched on his campaign message which included Building a stronger party for victory 2020 and beyond with Good welfare packages for all party executives, Recognition for party elders and members, effective grassroots mobilization, Empowerment of the party executives and members. Also, Mr Ntim touched on something that he started in 2004 as a National 1st Vice Chairman ie ensuring that each constituency gets a party office, he is given the opportunity to become the Chief servant of our party.

All the constituency executives unanimously declared their support for Mr Ntim for National Chairmanship position.

Speaking on behalf the Constituency Chairmen Mr Stephen Kojo Arhin stated that ” Mr Stephen Ntim must be rewarded for his Hardwork, long suffering and loyalty to the Party this time around”.

He further stated that ” Mr Ntim has a very credible, Sound and achievable campaign message which would see the party rule beyond 8(eight) years”.

“One thing that amazes us is that even though Mr Ntim has lost 3(three) consecutive attempt to become the National Chairman, he has not relented in his efforts to serving the party. He has always provided letter heads and other logistics free of charge to Party nationwide and many more” he concluded.