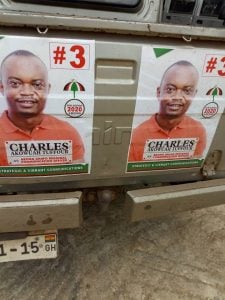 Again, he stated that NPP is not worth dyeing for because all juicy position are prepared for the Rich and those with God Fathers in the party. But with NDC irrespective of who you are, one can rise to the top and when the party is in power you would never be neglected.

Also,he advised all the youth in Brong Ahafo to join NDC as it is the best party for them. Just compare the number of elected national executives in the NDC from Brong Ahafo and the NPP,you all saw what President Akufo Addo did to our fellow Brong Ahafo Man in their national Chairmanship race held in koforidua and no one would tell you to join the better party for we Brong Ahafo people.

Finally, he pleaded with the NDC delegates to give him resounding victory in the regional elections for victory 2020.

Wed Aug 15 , 2018
By Kwaku Antwi – August 15, 2018 The Asogli Traditional Council, made up of 33 traditional areas in the Volta region on Wednesday declared Mr Freddie Blay, the New Patriotic Party (NPP) National Chairman “unwanted” in the Region, especially in the Traditional Council. This follows Mr Blay’s alleged failure to […]