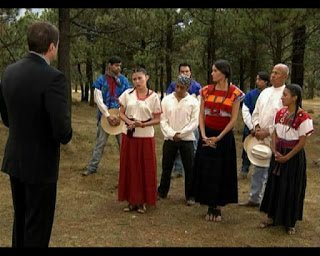 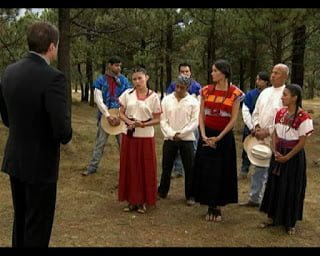 SATURDAY UPDATE ON AMAYA – EPISODE 124
Juliana reproaches Lucrecia for her intervention and she is astonished when she receives a hard slap on her face and she tells her she always knew she was a heartless and worst human being in the whole wide world and today she confirmed that she indeed has no limit since she was able to pay her music teacher Armando to seduce her and pretended to love her and get her out from the house and far away from her family and Lucrecia becomes so surprise and warns her not to dare touch her again. She then accepted that she did that to protect her place in the house and Juliana says that wasn’t love because if she indeed loved her dad, she would have accepted to allow her dad to be with woman he loved and that is Florencia.
Juliana then assures her that for all the wrongs she’s committed, she surely not rest until she sees her begging on her kneels for forgiveness but that Lucrecia says she will never see that happen and Juliana warns her that they will see about that.
Max informs his father he’ll go to “El Paraiso” for the first coffee harvest and asks him to be the one to deal with Amaya.
Carolina is able to trick Cesar’s secretary into leaving her desk to have Amaya get the memory card from the table and she checks the memory and there she has the evidence. The secretary takes the card back pleading with Amaya that she has to give it to her boss and not her. Amaya and Caro now get convinced that Cesar is behind Gustavo’s death and that it could be Aaron was the one who killed him.

Juliana confesses to Eloisa she has decided to put Lucrecia in evidence before everybody.
Yaayaa forbids Becca to talk to Ivan about his wedding or Mariana and decides to take him out of the farm in case somebody goes looking for him.
Carolina gets information from Nuria about Aaron by pretending that she likes him and so she would like her to give him his number so she can contact him.
Ulises torments himself thinking Mariana is expecting Ivan’s baby, and same vein, father Hipolito is planning to organize the farm workers to file a lawsuit against Ulises for not giving them their severance pay and they agree.
Heriberto sends a rose to Flavia and she’s moved.
Ulises refuses to tells Mariana about her pregnancy because apparently, Ivan is already dead.
Amaya asks Horacio to take Valeria to spend the night in his house and he mistreats her.
After Mauro hearing about Lucrecia paying Armando to lure his daughter away from home and to abandon her just like that, he goes home and demands from Lucrecia for the divorce and she threatens with taking Lucio with her if he dares. But Mauro refuses to see that happen and Mauro says he still wants the divorce and Lucrecia agrees but with great discretion as they go through the divorce procedure so Lucio never gets traumatized with the situation.
Yaayaa tells Ivan they’ll go to Mexico City and start a new life together.
Cesar is really furious and he calls Amaya to meet him in a special place to give her a surprise and Amaya wonders what it is but she decides to go if not Cesar will start suspecting she had something with Max and same vein, Cesar thinks about Amaya’s statement “thinking about Cesar’s hands around her makes her feel like vomiting” and it hurts him more than anything in the world and he continues to shed tears over that.
Facebook
Twitter
Pinterest
LinkedIn