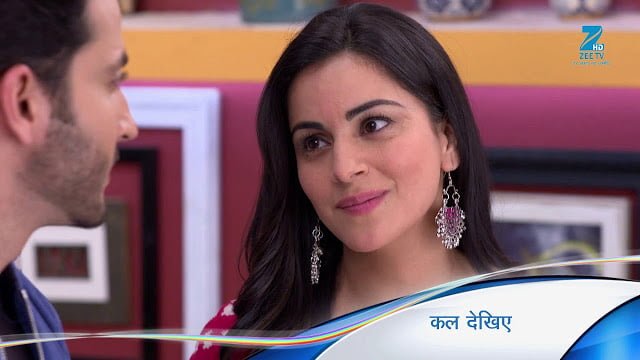 Outside the room, Shrishti decides to find out what’s going on in Karan’s mind. She was afraid to go inside directly then goes towards the table. Bee ji offered her to drink with her. Sarla was annoyed as she doesn’t like it. Bee ji wonders how she would otherwise celebrate. Shrishti comes to gulp both glasses at once upon being excited for celebration.Preeta was worried listening to Karan. She says it is very late now, in their middle class family’s one get good proposals after much difficulty. Karan says she could have said she isn’t interested. Karan gets a call from Rishab, Preeta was nervous and worried at once. She wonders what Karan wants, if he would marry her. He would surely propose her today, then reminds herself about his egoistic, misbehaving nature. She regrets Shrishti
away.
Outside, Shrishti’s head banged badly. Sarla was angry at her condition. Shrishti tries to communicate to Dadi about Karan, but her head ached badly. She thinks it is possible Karan might propose her. Preeta tells Karan she hadn’t promised anything to him. Karan says she did, when they were really close. He blames her to be cheating on him. Preeta says she doesn’t realize what he is trying to say. Karan insists on her to listen to her, Preeta wasn’t ready to listen. Karan asks if he must ask her after her marriage, to postpose her wedding. Preeta asks if he wanted to ask her to postpone her wedding. Karan reminds her about their mission, of Sherlin and her ex. Preeta wipes her sweat, realizing. Karan asks what she thought. Preeta lies that she thought it was about Prithvi. She insists on Karan to tell her about Sherlin, Karan says she fast for Rishab today and insists to complete her fast. Preeta says there is a deep planning.
Rishab comes to Rakhi’s room and drags her to come along. He then sits to correct her nail polish he ruined and looked upset. He shares with Rakhi that Sherlin is fasting for him; he dislikes this all. She isn’t eating or drinking; then complains about feeling acidity. He requests Rakhi to ask her break the fast. Rakhi wasn’t ready. Rishab blackmails for being annoyed with Rakhi. Rakhi conditions she would only ask her once. Rishab says twice, please.
There, Karan tells Preeta that if Sherlin is really fasting; she should break it in hands of her ex surely. They can follow her then. Karan teases if Preeta also fast for him.. Preeta qualifies Prithvi. Karan exclaims wow, she well remember his name as well. Preeta says its good, at least he mustn’t doubt her for being behind Rishab. Karan says that doubt was resolved, now he doubts she is falling for him. They share an eye lock.
There, Rakhi convinces Sherlin to break her fast; she looks weak and suffers from acidity as well. Sherlin asks Rakhi when she fast the first time, she must also have to go through this all. A woman must have the wish to fast for her husband to be. She wants to fast with the same intensity Rakhi fasts for Mr. Luthra. Rakhi blesses Sherlin, then tells Rishab she is with Sherlin.
Janki also gets a drink for herself. Shrishti thinks what if Karan proposes Preeta today and is in love with her, she must figure out. She turns to leave but slips on her way, she assures Sarla she is fine and only wants to speak to Preeta. Sarla and Bee ji have an argument over drinking.
Preeta asks Karan if he is lost, if he considers her so characterless. Karan argues if a characterless girl only falls for Karan. Preeta wasn’t ready to listen, he stuffs her mouth and says he must listen. In physical tug and pull, they fell on the bed hand in hand. Shrishti enters the room then, she was left open-mouthed witnesses their eye lock.
PRECAP: Karan tells Preeta to stay behind him, and not get caught. They were planning outside the room when they discovered Kareena stood right behind them