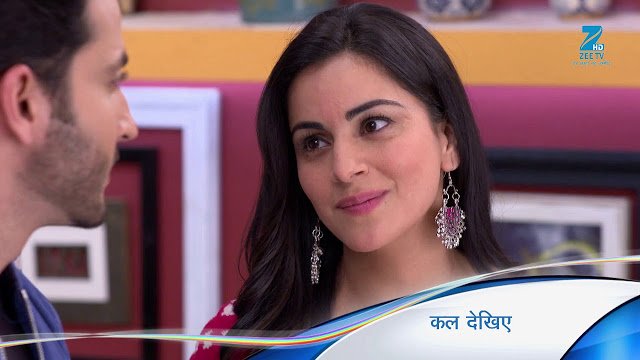 Karan was lost for a while watching Preeta as she shies. He was offensive for Shrishti and Janki calling him the groom, else it might get true. Sameer comes inside and greets them, Shristi curtly asks what he is doing here. Sameer asks Sarla if she is truly her daughter, or she got her from a fair; she always fight with others. Shrishti takes it as a challenge for some time later. They were served with snacks. Karan appreciates Samosas, Sarla says Preeta made these herself. Sarla and Dadi goes inside to look after some work. Sameer and Shrishti also leaves the hall. Karan offers Preeta to have a bite and says it’s much spicy.Sameer comes behind Shrishti and asks why she called him here. Shrishti tells him to stay in his limits. Sameer warns her not to be offensive. Shrishti leaves pushing
him away.
In the hall, Karan tells Preeta the guy doesn’t look good. He has no girlfriend, he is a drunk man and people have to carry him home. He always cheated in his class. He is as thin as a rod. Preeta stops him and goes inside the room, slapping the door. The doorbell rings, Sarla goes to welcome the family. Sarla introduces Dadi, Shrishti and Janki.
The guy parks the car outside. Girl’s heads were turned towards him. He buys a game to a little kid in the way, helps a lady carry luggage into her auto. Preeta comes to greet them. Karan and Sameer were shocked the see the breathtakingly handsome guy. Sameer was impressed by his biceps. The guy touches everyone’s feet, even Janki’s. Sarla introduces him to Preeta. Preeta doesn’t shake the hand he had forwarded, then smiles and takes it. He introduces himself as Prithvi Malhotra. Sarla serves the guests.
Karan asks why Sameer is staring at him. Sameer says he is really good looking. Karan and Sameer join them. Sarla joins her hands to say something. She says she will do as much as she would be able to, maybe she won’t be able to fulfil all their wishes. Prithvi stops Sarla there, he says he is a dwarf today in front of her. They aren’t the rich, but Sarla is; they have come to request for her daughter today. Sarla was impressed. Preeta whispers to Karan he isn’t like him at all. Dadi appreciates Prithvi’s upbringing. His mother compliments his car for everyone. Prithvi says cooking is his passion, his mom doesn’t let him in so he took the chance when his mother was ill. His parents compliments him to be very hardworking. Preeta whispers to Karan he is a better businessman than him, what exactly he do? Prithvi doesn’t recognize Karan and Sameer, and asks if they are Preeta’s cousin brothers. Karan gets a hiccup. Sarla explains Preeta and Shrishti work with Rishab – their elder brother. Sameer asks if he didn’t recognize, this is Karan Luthra- star cricketer of BPL. Prithvi apologizes for being least interested in cricket. Infact he considers it a game of idiot where a batsman and baller play and the other 11 are fools to chase a ball. Preeta laughs aloud.
Sarla allows Preeta and Prithvi to speak in loneliness. Karan places his foot in Prithvi’s way but he turns to apologize and moves on. Karan feels bad that Preeta went with Prithvi so easily. In the room, Prithvi thanks Preeta to come to speak to him. He hopes she is comfortable here, its awkward and he can’t understand what to speak about. He makes Preeta speak and allows her to slap him at once if she dislikes something. Preeta smiles that he has a good sense of humor. Prithvi asks to sit besides her, but as she was reluctant he sits on the bed himself. He says they can get away of this reluctance if they become friends. He asks about her hobbies. Preeta says she likes reading and music; she gets less free time and spend the time with her family. Prithvi notices she loves her sister, as he could sense it in her eyes. Preeta was impressed by him.
PRECAP: Prithvi asks if she had a boyfriend. Preeta replies she never had boyfriend, but once her engagement broke right before it was about to take place.