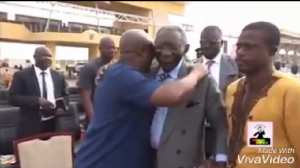 On the resurfaced video, Former President Mahama and Rawlings met at the 25th anniversary celebrations of Ghana 4th Republic , which came off at the Independence Square in January 2018.

John Mahama, at the event, was already in line and dignitaries passing by him had to greet him. Mahama warmly greeted former President J.A Kuffour and the two even hugged like long lost brothers.

However, when Rawlings walked up to Mahama, he didn’t look at him and just shook his hand like his worst enemy just like what President Akufo-Addo did on Wednesday at the Kofi Annan Peace summit. The two videos seek to confirm why Rawlings silence on many societal issues that are affecting the populace under Akufo-Addo government, especially the many corruption scandals that are on going which many anti-corruption crusaders have described as the worst in the country’s history. Mr. Vitus Azeem formerly of Ghana integrity initiative, speaking to GhanaWeb this week described Akufo-Addo’s government most corrupt in the 4th republic. The anti-corruption campaigner intimated that efforts by the Akufo-Addo government to curb corruption is nothing shy of a disgrace, he further questioned the President’s motives for appointing some cabinets members have history of indulgence.

“…now people are touting the government that it’s one-day one-scandal, not one village one dam. So you begin to wonder, what is it that we have gotten wrong; why is this happening…

The emergence of the new video of Akufo Addo subtly avoiding a ‘proper’ handshake with Former President John Dramani Mahama has provoked serious responses against the President. The President appeared to have somewhat given a rather unusually brief handshake to his ‘contender’ when he went round to shake hands with dignitaries present at the maiden edition of the Kofi Annan Peace and Security Forum Wednesday, September 4, 2019.

The new video shows how the former President was ‘skipped’ with the pleasantries; his demeanor with the persons just before and after the former president has raised eyebrows of several Ghanaians.

Then Prez Mahama and Then Candidate Akufo Addo

Former President John Mahama and then opposition leader Akufo-Addo have over time, been captured in several videos and photos, chatting, and interacting heartily, sometimes, exchanging a few words and laughing when Mahama was the President.

The current video circulating on social media, however, portrays a somewhat ‘different’ situation and raises questions about the current relationship between Former President Mahama and President Akufo-Addo as the country goes to the polls next year. Many believe the President Akufo-Addo demeanor in the video does not engender the peace we all pray to sustain before, during and after the general elections next year.