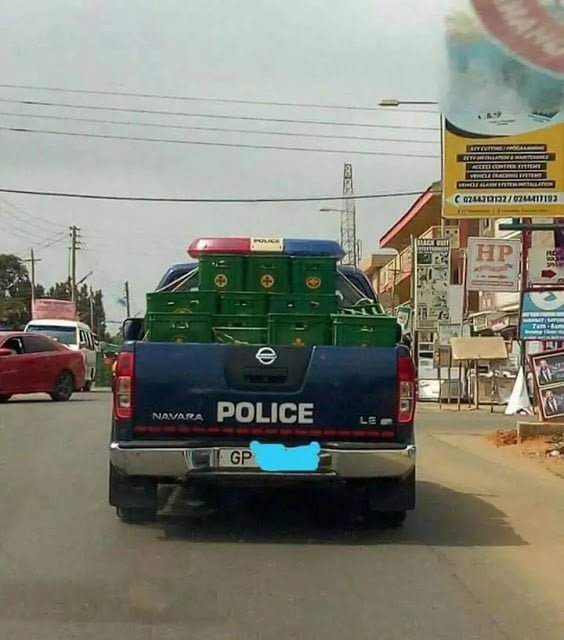 With the recent robberies that have sprung up in many places around the country, the police service has come under a lot of scrutiny and have been put to the test to fight the menace. In the wake of these security threats, a photo of a police patrol car has made it to social media and has generated a huge debate among many Ghanaian social media users. The patrol car caught the eyes of many people due to the load that was spotted in the carrier of the vehicle.

The photo that was sighted on Facebook by YEN.com.gh pictured the police car loaded with crates of what was purported to be alcoholic beverages. The picture has led to a hot debate among social media users as to the purpose of carrying so much ‘booze’ in a police vehicle.

A section of the internet users who argued in favor of the police said it was probable that the beverages were going to be used at a ceremony of an officer or it was likely that it was meant for the cafeteria.

However, some commenters who disagreed with those supporting the incident said the purpose of the vehicle was not for conveying alcoholic beverages no matter who it was meant for. One Facebook user sarcastically commented, “They might have been relocating the bottles to a safer place to save a chaos. You may never know” Another Facebook user who appeared peeved over the incident said that, “They don’t even know how to maintain vehicles, visit 37 Police baracks and it will shock you the number of cars not in use and if you ask the problem of each car you will be amazed forgetting that if you release a prisoner you pay, where does that money goes?”