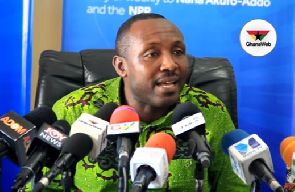 Acting General Secretary of the New Patriotic party John Boadu has stated that,his deputy Nana Obiri Boahen, admitted that he peddled falsehood when he suggested that government donated an amount of GHC 50 billion for the conduct of the party’s 2017 Annual National Delegates Conference held in Cape Coast in 2017.Obiri Boahen in a leaked telephone conversation that has gone viral lamented bitterly about some happenings in the NPP and complained that he has been sidelined in the sharing of the national cake.In the audio, Obiri Boahen is heard bemoaning the fact that despite being faithful to the NPP even when they were in opposition, he is not benefiting like others are doing.He among other things alleged that the presidency gave out GHc50 billion in support of the party’s Delegates conference held in 2017 in Cape Coast.“When we were going to Cape Coast the other time, I was given GH¢3,000 as a member of the Resolution Committee and an additional GH¢2,000 for fuel. Meanwhile, the Flagstaff House gave the party an amount of GH¢50 billion,” Boahen alleged in the audio.Mr. Boadu indicated that Obiri Boahen had subsequently indicated that he made such false claims to solicit information.“You aware he is saying yes, it is his voice but he has admitted he lied to solicit some information from the person who recorded him,” Obiri Boahen statedAsked whether these claims were true, despite Obiri Boahen’s subsequent retraction, Mr. Boadu said the party’s investigations will establish the truth.“I do not know whether it actually happened and it is for this reason that we called him to verify these claims,” John Boadu said.Mr. Boadu further stressed that government never gave the party funds to conduct the Conference as suggested.“Government did not give the New Patriotic Party (NPP) 50 billion. How can government give a political party money. We have been running this party for years? We were the first party to buy our headquarters in 1992. We are a party that is well resourced and willing to support a party. We have been going for conferences over the years and we have never had a situation where our conferences have been postponed because of lack of resources. We funded the Cape Coast event the same way we funded all the other conferences that we hold.”“We want to state on record that we have run this party over the years and we are clear in our minds about the clear distinction between party and governments, although we are the mother of the government. We still want to ensure that government activities are government’s and it is for that reason that we said MMDCEs, Deputy Ministers and party officers who hold positions must resign and that has been established so I am surprised.”The New Patriotic Party (NPP) had earlier on Wednesday issued a statement indicating that it had tasked the steering committee to look into the matter.