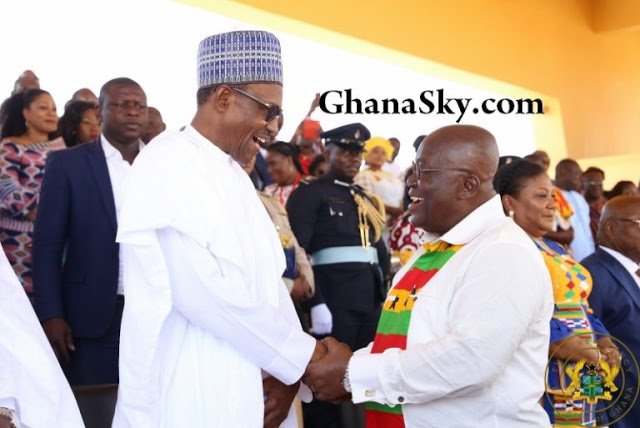 The Nigerian President has said he is looking forward to collaborating with the Akufo-Addo government in its fight against endemic corruption.
Muhammadu Buhari said it has become reassuring that with the right leadership, the continent’s drive to eradicate poverty and entrench democracy is on course.
Speaking as the Guest of honour at Ghana’s 61st Independence Anniversary Tuesday, he commended President Nana Akufo-Addo for his efforts at fighting corruption.
He also assured Ghana of his readiness to assist Ghana in any way possible to fight corruption.
“I congratulated both the government and parliament for the quick passage of the Special Prosecutor Act and its signing into law,” he said.
The Special Prosecutor, Martin Amidu, begun work on Monday after he was sworn into office two weeks ago and is expected to lead government’s anti-corruption crusade.
Mr Amidu received an overwhelming endorsement from Parliament’s Appointments Committee after his vetting last month.
President Buhari did not hide his pride for the new administration for the strides it has made since taking over the reins of government on January 7, 2017.
“All these efforts have made Ghana become a good destination for foreign direct investment just like Nigeria,” he said.
According to him, the good relationship between the two countries should continue so the citizens of both countries continue to live in each other’s country uninhibited.
He appealed to the opposition parties in Togo to come together and resolve their difference for the country to move forward.
“In the same way, I wish Nigeria and Ghana will continue to provide the impetus in realizing the objectives and the founding fathers of Economic Community of West African States (ECOWAS) to ensure development and peace of our region,” he said.
Watch Video Below:
Source: Myjoyonline.com
Facebook
Twitter
Pinterest
LinkedIn

7 prophecies of Nkrumah that are happening right now