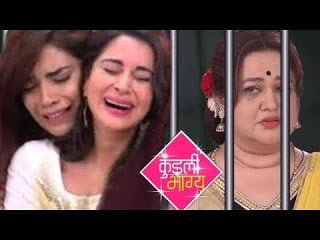 Karan tells Preeta she and Rishab can never be together. Preeta asks if he really considers her so selfish, he then never recognized her. She says if he can’t help her, he must give her a chance to prove Sherlin isn’t the right girl for Rishab. She holds herself responsible for fixing of this proposal. Karan corrects Rishab liked Sherlin and Preeta has no role, she must stay away from his family. He warns Preeta to stay away from Rishab, else this would get personal. Preeta shouts from behind to trust her, she was curt he didn’t even try to understand her and was worried.At home, Mohan asks about Preeta. Dadi assures Preeta would soon be here. She tells Kappu and Mohan to go home, sleeplessness would not solve any problem. He has a huge order for tomorrow, and they need money to
help Sarla. Kappu wasn’t in a mood but agrees to finally go. Dadi asks Shrishti about address of Sherlin. Shrishti says she doesn’t. Dadi says she must have gone to hit Sherlin with her sandal, had they known the address. Preeta comes home and goes inside without speaking to anyone.Karan returns home and thinks he would not share Preeta’s accusations with Rishab. Preeta’s isn’t as important. In the room, Preeta was irked calling Karan as egoistic and ill mannered. Everyone including her family know Sherlin is jealous of her, and Karan thinks she is jealous. Why would she be jealous when she doesn’t want to be like Sherlin? She wonders in what direction is everyone going. Karan decides not to share anything with Rishab, he considers Preeta needy and helps her. He must not worry Preeta. There, Preeta decides to speak to Rishab about Sherlin. She calls on his number then wonders what is she going to do, Rishab must already be tensed because of Rakhi. She decides to let the night pass, and was determined to never talk to Karan. Sameer meets Karan in the corridor and asks where he had been. Karan doesn’t tell Sameer where he was. Sameer thinks Karan must have fought Preeta. He feels sad that no one is helping Shrishti and Preeta, but what can he do when even Rishab couldn’t help them.

Rishab requests to meet Sarla for a while. The inspector insists that lady ruined his engagement. Rishab says he is sure there was some conspiracy, he requests to meet Sarla. The inspector allows Rishab. Rishab apologizes Sarla. Sarla says she understands he wanted to help her, they also wanted his function to happen the best way. There was a single mistake by somebody that let her inside the jail. Rishab says he feels really apologetic, he has been helpless for her right now. Sarla says she knows well how to recognize a man. Rishab thanks Sarla for understanding him. Sarla says sometimes we can’t go against someone else’s decisions. Sarla was thankful that Rishab thought about her, and came to meet her. She forgives Rishab and inquires if his family is fine. She was thankful that everyone is fine, and tells him to go home; his family needs him. Rishab leaves with a heavy heart.Sameer arrives at Shrishti’s house and couldn’t gather courage to go inside. He calls Shrishti from inside. Shrishti was enraged, she asks if he came to show any sympathies to them. She complains that rich always consider them worthless, and will disgrace them again just like what Sherlin did. Sameer asks what Sherlin did. Shrishti says Sherlin ruined her own engagement, she wanted their function to get flop and they are disgraced. Any rich girl would do this for her own entertainment, now what she should do about Sameer. Sameer couldn’t understand what Shrishti is saying. Shrishti pushes him away and tells him to leave if he doesn’t understand. She cries badly telling him to leave. Sameer walks to her, Shrishti hugs him crying as her mother is in jail. Sameer finally places a hand over her head. Sameer thinks about his confrontations with Shrishti. She straightens up at once and runs inside. Sameer was tensed and thinks Shrishti is really enraged, he feels helpless and can’t help her at all. He only hopes her days get better.At home, Dadi was massaging her foot out of pain. Karan comes to massage her. He tells Dadi he woke up by himself for practice today. Dadi screams of pain at once, then asks if she won’t ever come again? Dadi tells Karan that Preeta does the treatment with love and has magic in her hands, only she could make her recover from this ache. If she will have to bear this pain again for lifetime, or will Preeta come? Karan remembers forbidding Preeta come to her home again. The butler comes to inform Rakhi is calling Karan.In the room, Rakhi calls Karan inside. Karan complains no one is pampering him at home, Rakhi needs to recover soon. Rakhi assures she would soon be fine. Rakhi asks Karan about Preeta. Karan thinks it seems Rakhi is only angry at Sarla, and still likes Preeta. There, Rakhi was concerned. The nurse comes to forbid her speak more and exert herself. Karan assures Rakhi Preeta is fine and leaves the room. He thinks only Preeta is responsible for his mother’s condition. In the room, Preeta sat worried how to bring her mother out of jail. She wonders what she must do about it. She gets a call from Karan and says everyone at home including his mother and Dadi are missing her, what magic she played.PRECAP: Karan tells Sherlin that Preeta considers Sherlin responsible for food poisoning. Preeta also thinks something else about her. Sherlin was worried. Karan says Preeta was looking for her last night, but couldn’t find her.
Facebook
Twitter
Pinterest
LinkedIn