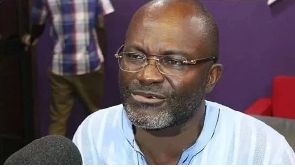 Member of Parliament for Assin North, Kennedy Ohene Agyapong has accused ace broadcaster Abeiku Santana of being corrupt. According to the MP, Abeiku has been involved in several shoddy deals and must be jailed for that.The controversial and outspoken lawmaker further accused the broadcaster of selling a state vehicle to a businessman during the erstwhile John Mahama administration.Speaking on Oman FM’s Boiling Point show, Thursday night, the firebrand NPP MP described Abeiku as a “crook” who deserves to be in jail.

Mr Agyapong explained that national security operatives managed to retrieve the said car from the businessman, only to find out that it was Abeiku who sold it out. He wondered why such a thing should happen, insisting the Okay FM presenter is in no capacity to sell a state vehicle to another person.Abeiku Santana is known to be a staunch NDC supporter, and was one of the main advocates for John Mahama during the 2016 elections. The presenter has, however, often shrugged off criticism from those who chide him for taking a stand when it comes to politics. In his view, there is no crime in supporting the NDC and he will continue to do so until the party returns to power.
Source: yen.com.gh
Facebook
Twitter
Pinterest
LinkedIn

Gospel Music: DESMOND ABABIO DROP HIS JOYFUL SONGS ALBUM – GET IT ALL HERE

Don’t take Opuni to court; shoot him – A Plus suggests