I am not a lesbian – Kumawood actress 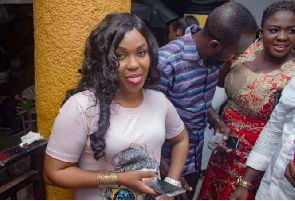 Fast-rising Ghanaian actress Louisa Adinka has strongly refuted claims that she is a lesbian, insisting she is very sexually active. Reports from certain quarters claimed that the Kumawood actress is a lesbian who pushes men from approaching her. However, she has strongly denied such claims, saying she could never bring herself to sleeping with a fellow woman. Speaking on a yet-to-be launched television show “Time with Tracey”, Louisa said she is a very sexually active person and would never be involved in lesbianism. “As I sit here I won’t lie to you; I love sex and I have very active hormones that reacts easily to me,” she told the host. The actress is successfully married, having tied the knot at a very young age despite her profession.
Asked why she married early, she explained that she didn’t want to be played around by men, hence her decision to settle down. According to her, many ladies who fail to marry early end up falling into the hands of unserious men who only sleep with them. This, the actress said, is a situation she wanted to avoid. The actress, in a recent interview with Zionfelix.net, revealed how two years after marriage with no child, family and friends began calling her names. According to her, family indirectly told her to give birth because it is unusual for a lady not to give birth two years after marriage. The ‘Abodam’ actress further stated that she heard most people calling her a barren and that broke her down. To her, she worried over the issue for about six months but became used to it because she knew that she had no problem with giving birth.
Source: yen.com.gh
Facebook
Twitter
Pinterest
LinkedIn