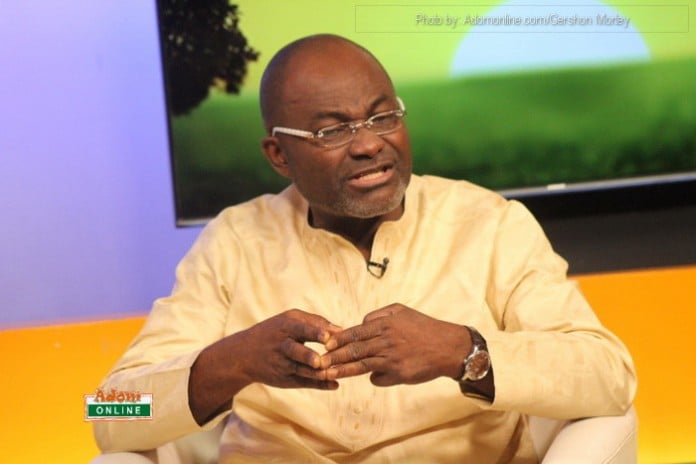 Assin Central Member of Parliament (MP), Kennedy Ohene Agyapong, has threatened to strangle a man who is standing trial for plotting to kill him.
The maverick politician said he believes in the law of Moses hence thinks the man doesn’t deserve to live after he plotted and attempted to end his life.
“I will strangle the man to death, I know I will be jailed because I will go and witness it, I will use the same format he sought to use to kill me…,” he said.
Click on attached audio for more:
He called on the judge presiding on the case between him and the guys who attempted to end his life to know that he, Ken Agyapong, will kill the ring leader and also ‘eliminate’ all his accomplices.
“The judge must know that I can’t promise her…as for this dirty guy, I will kill him…I mean every word of what I said, I will kill him, mark my words,” he said
Speaking on Accra-based Oman FM’s Boiling Point on Thursday, Ken revealed harrowing stories of how the man identified as Efo Filipo was contracted by some top gurus of the National Democratic Congress (NDC) to end his life for being critical of the then NDC administration.
Efo Philipo, according to Ken Agyapong, worked to release some others from prison to come and complete the assignment.
“The story is, this guy left home three days after coming from prison and returned later with huge sums of money. One of the people in his house confronted him on why he managed to come by such huge amount of money few days after being released from prison. He was reluctant in disclosing the source of the money initially but later confessed that it is the amount given him so he can go and kill one MP by name Ken Agyapong…,” Ken narrated.
That guy later informed Ben Ephson of the Daily Dispatch who in turn informed the then Inspector General of Police (IGP), Mohammad Alhassan.
The shootings
The Police, following investigations, lured the contract killers into the home of one former IGP in Cantoments.
“The boys after storming the house put off the lights in the house and started firing in all directions with the intention of killing me. All the three boys were killed in the cross-fire between them and the police…,” Ken added.
After this episode, three other boys were sent to the Assin Dompim residence of Ken Agyapong to complete the assignment; the police also managed to convince them that Ken was in Tema after prompting Ken to leave Assin Dompim.
“When the boys stormed my Tema residence, the police chased them there and arrested all three (3). One of them is named Mumuni…,” he said.
According to Ken Agyapong, the NDC managed to suppress the case while in power and caused the release of the three after threatening the Police.
However, the police managed to take the case to court.
“Anytime the case was called, the boys were escorted to the court in 3 Land Cruisers. But the tables have turned and I will ensure that the law of an eye for an eye and a tooth for a tooth will be applied here…,” he threatened.
Ben Ephson confirms
The narrative of Ken Agyapong was confirmed by the Managing Editor of the Dispatch Newspaper, Ben Ephson.
“It’s true but I must praise Ken that for the past 6 to 7 years, he has accommodated the family of the informant and has been taking care of them including his children…”, he said.
source : adomonline.com
Facebook
Twitter
Pinterest
LinkedIn