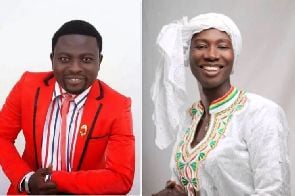 Gospel musician and prophetess Cecilia Marfo has reacted to claims by colleague gospel singer, Brother Sammy, that she orchestrated a secret plan to destroy him.

A viral video the concert revealed a deliverance session which saw Brother Sammy receiving some slaps from the prophetess.

Reacting to this issue in a radio interview last week, Brother Sammy had suggested that Cecilia Marfo and another gospel artiste, Ernest Opoku planned the whole deliverance session.

This, he explained, was to tarnish his image and bring his brand into disrepute, since he is a big threat to them in the gospel industry.

Brother Sammy went further to claim that Cecilia Marfo was not a genuine prophetess.

But responding to Brother Sammy’s claims, Cecilia Marfo who is the founder and leader of Osorifie Prayer Centre denied the fake prophetess tag.

According to her, she was a true prophetess who has a convenant with God.

She also made allegations of her own that Brother Sammy was being used by fake prophets to bring her down.

“It is evil to make an allegation against me for your progress. You have teamed up with evil pastors to bring me down but it will never work” she stated.
Source: yen.com.gh
Facebook
Twitter
Pinterest
LinkedIn