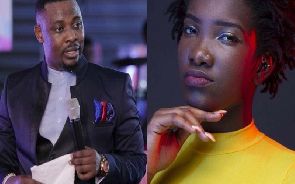 Prophet Nigel Gaise, the man of God who prophesied the death of the late dancehall musician, Ebony Reigns has dared the latter’s family over their threat to sue him for defaming the award winning songstress.

The prophet who’s the Founder and leader of the True Fire Prophetic Ministry (TFPWM) emphatically stated that Ebony was going to be killed in an accident and that nothing could save her, and indeed it came to pass as the musician died in an accident on February 8, 2018 on the Kumasi-Sunyani road.

Other reports have quoted the prophet as saying that God showed him Ebony’s death months before it happened, adding that God told him to caution Ebony against “Chronic Lesbianism”.

The family of Ebony Reigns led by her father, Mr. Nana Opoku Kwarteng has revealed that they are considering taking legal action against all the prophets who have spread false news about Ebony known in real life as Priscilla Opoku Kwarteng ever since she died.

They expressed their discomfort on Saturday when Mzbel, Afia Schwarzenegger, and Tornado visited them at Dansoman, a suburb of Accra.

Angry Afia Schwarzenegger during a conversation with the family pleaded with them to sue men of God who have planned to cash in on the death of Ebony.

According to her, these prophets who claim they saw the demise of the ‘Sponsor’ singer before it happened have constantly been tarnishing the image of the dead body so one of them should be used as a scapegoat.

Schwarzenegger who claim she has a video recording of Prophet Nigel Gaisie making those comments rebuked him for calling the Ruff Town Records/Midas Touch artiste a chronic lesbian, questioning the essence of calling Ebony a lesbian because she did not showcase her boyfriend to the world.

Nana Poku Kwarteng, Ebony’s father after listening to the TV and radio presenter’s plea promised to take legal actions against them but after things are calm.

But Prophet Nigel Gaise in an interview has called the family’s bluff, daring them to go ahead and take legal action against him if they so wish.

“I read it on the internet and some people also came to tell me that Ebony’s family intends to sue me. It’s welcome, I’m a prophet of God and I’m not of myself. Whatever the Lord tells me and any direction the Lord gives me, I’ll give it to the nation and I’ll tell whoever is involved. Let everyone understand that nobody can gag the prophetic, throughout history the prophetic is important and any nation that does not respect its prophets and the prophetic office, that nation hits the rock and doom becomes their portion. I’m a Holy Spirit led prophet, whatever the Spirit tells me I’ll tell the nation.”

“…. When the prophets keep quiet the nation will sink. We have powerful prophets here in this country but we don’t take them seriously and we victimize them. How can you say that a prophet has prophesied and so you’re taking the prophet to court, of course we’ll meet them in court, some of these things don’t hold water. The Lord revealed something to me and I said it. I did not give a prophesy of probability, it is a detailed prophesy and it has come to pass.”

Kaakie releases photos of chat with Ebony before her death