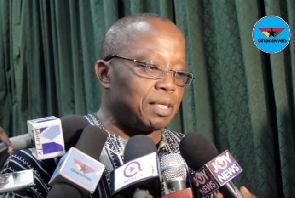 While struggling to retrieve the GH¢51.2 million wrongfully paid to embattled businessman Alfred Agbesi Woyome, public institutions have overpaid some contractors and suppliers to the tune of GH¢53.1 million (GH¢53,178,715.42).

Infralocks Limited, which was awarded a GH¢15.6 million contract by the Ministry of Energy for the supply of Pole Mounted Transformers, was paid GH¢17.9 million (GH¢17,967,313.97), resulting in an overpayment of GH¢2,032,686.03, which the Auditor-General said should be recovered from the company.

It was realized that Busi & Stephenson Ghana Limited, which was awarded a contract by the Energy Ministry to supply treated wooden poles and stay blocks, was overpaid by GH¢343,071.94.

The Energy Ministry contracted UCL Limited for the supply of aluminium conductors, and ended up overpaying the contract sum by GH¢2.1 million (GH¢2,101,383.75).
The Auditor-General is to issue surcharge against the person who authorised or made the payment or the one who received the payment.

Persons surcharged have up to 60 days to challenge the conclusions of the Auditor-General in a high court or pay up the money.

Daniel Yaw Domelevo, the Auditor-General, announced this at a media encounter to officially inform the public that the Auditor-General’s report on MDAs liabilities as of December 31, 2016 has been presented to parliament. GH¢771m double claims rejected.

Domelevo could not fathom why officials submitted claims which had already been paid for, and suspects fraud.

‘Give me prosecutorial powers’ – Auditor General

The total outstanding commitments submitted by the Ministries, Department and Agencies (MDAs) through the Ministry of Finance to the Audit Service amounted to of GH¢11.2 billion (GH¢11,279,183,400.09).

After the validation, a total of GH¢5,570,594,500.24 was certified for payment. The Auditor-General issued management letters to each of the MDAs, and some of them were able to provide documentations acceptable to the Auditor-General, who took the feedback into consideration in preparing the revised report.
At the conclusion of the audit, out of a total claim of GH¢11.8 million (GH¢11,810,579,603.55) submitted by the Ministry of Finance to the Audit Service, it was able to certify a total of GH¢6.3 million (GH¢6,331,326,592.29).

“The basis of our rejection, amounting to GH¢5.4 billion (GH¢5,479,253,011.26), was due to the absence of relevant documentations (such as warrants, contract documents, invoices, procurement records, SRAs, etc), use of projected contract cost, goods not supplied and claims which had already been paid-for.”

Public service audit is based on evidence not trust – Auditor General

There was a whopping GH¢1.4 billion (GH¢1,429,370,774.13) difference between the figures submitted to the Auditor-General by the Finance Ministry and MDAs.

Domelevo, who could not fathom the cause of the disparities, said the Finance Ministry needs to explain it.

The top five disallowances are Ministry of Health – GH¢1 billion

The Ministry of Fisheries and Aquaculture, Judicial Service, Audit Service and the Commission on Human Rights and Administrative Justice are not culprits of the rejected claims.
Bad contracts signed

According to Domelevo, contracts were signed under varied terms, some of which were harsh and placed government in a weaker position. For example, he said, terms such as “indexation to foreign currency”, “interest on delayed payments”, “advance mobilisation”, “price variations”, “award of contract in foreign currency”, etc, all tend to unduly increase government liabilities. No value for money

He explained that some judgement debts reviewed also attested to the fact that some Principal Spending Officers committed government without due regard to value for money.

“An instance is the judgement debt of $1.1 million ($1,111,834.2) in the case between Media General Ghana Ltd vrs. Ghana Broadcasting Corporation (GBC), where the GBC negotiated and entered into consent judgement without recourse to the Attorney-General,” he added.

He was of the view that the Public Accounts Committee of Parliament should concentrate on helping to fix the weaknesses in the internal controls because the Auditor-General would be focusing on surcharge and disallowances.

Domelevo suggested that internal auditors be made staff of the audit agency to give them true independence in the discharge of their duties.