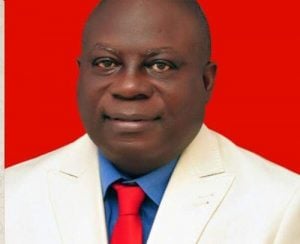 The District Chief Executive, Samuel Kwame Agyeku, District Coordinating Director, Mr. Kobla Joshua and other officials at the Asuogyaman District Assembly are under heavy fire over series of allegations of high inflation of prices of contracts and equipment procured at the assembly.

One of these allegations is the procurement of four set of computers and four set of printers at the cost of GHc43,332.10 for which a payment request was made by Naura M. Adjei in favour of GASEF Ventures. 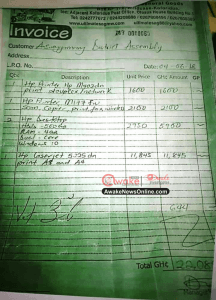 A copy of the contract documents obtained by Awake News indicated that District paid GH¢16,900 for one HP Laser Jet coloured printer whiles the same or similar specifications of the printer are sold on the market for GHC1,850. Also, an HP desktop computer which was bought at GH¢4,000 per unit goes at GHC2,500 on the IT market. 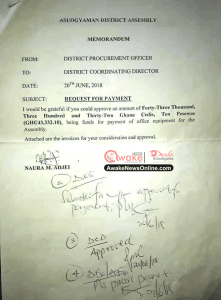 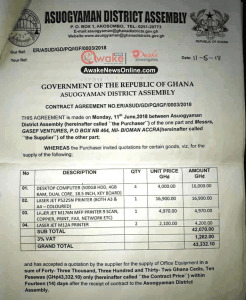 This action of the assembly became possible as a result of a scheme by the District Coordinating Director, Mr. Kobla Joshua with approval from the DCE.

Hiring of Naura Adjei to aid the alleged act of inflation of prices and contracts:

The high inflation of price at the assembly was hashed by the Mr. Kobla Joshua when he hired a new procurement officer, Ms. Naura Adjei after he might have noticed the existing District Procurement Officer, Ms. Philomena Aidoo could not aid him in perpetuating his plans.

In an interview with Awake News, Mr. Kobla Joshua confirmed the that there are issues of that nature in the assembly but indicated that matter is under investigation by the Economic and Organized Crime Office (EOCO) and therefore cannot make any comment on the matter.

Mr. Kobla Joshua had earlier served a memo on the District Procurement Officer, Ms. Aidoo to submit an invoice for the procurement of some office equipment. Ms. Aidoo was said to have called on UltimateSag Majesty Works, a company that has already been rendering such services to the assembly under the GIFMIS system. Ms. Aidoo did her dutiful by obtaining the invoice with a face value of GH¢22,080 from UltimateSag Majesty Works.

The GH¢22,080 from UltimateSag Majesty Works

Mr. Kobla Joshua hired Naura M. Adjei to occupy the position of the Procurement Officer and introduced at the District Management meeting as the new procurement officer and one of the best procurement personnel in Ghana.

Ms. Aidoo got sidelined! Her office was no longer being used.

Ms. Naura Adjei was alleged to have started work the District without transfer letter or appointment. The DCD had alleged that Naura was transferred from Tema Municipal Assembly in the Greater Accra Region.

She was then was tasked by the DCD to work the procurement of the same office equipment whose invoice was earlier submitted by Ms. Aidoo from UltimateSag Majesty Works but abandoned.

A quick background check by Awake News is pointing to the fact that the two companies that lost the bid could be ghost companies as a contact person of Ritagad Ventures who spoke to Awake Investigates undercover team claimed that their Ritagad is out of business following the death of its director and that the company has no office now as he speaks.

The District Finance Officer, Mr. Okrah is said to have protested the payment. This, among other payments red flags he raised cause disaffection between him and the DCE who is alleged to have said the Finance Officer is only to sign documents but not challenge his authority.

Mr. Okrah, after the protest had his office locked, transferred from the district, denied office at his new post at Koforidua and had his salary frozen for the past two months.

On the purchase of computer, a procurement officer was asked to bring quotations which she dutifully did. Three (3) quotation were brought with the least of Twenty-Two Thousand and Eighty (GH₵22,080.00). A section of the person was asked to bring quotation which an amount of Forty Three Thousand and Eight hundred Ghana cedis (GH 43,800.00) was made. To my dismay, I was instructed not to use the former, (GH₵22,080.00). My astuteness to challenge this decision warranted the second letter to passionately request for my transfer – a letter intercepted by Awake Investigates written by Mr. Okrah as a respond to a query has said

Mr. Okrah’s protest according to sources, caught the attention of some Assembly members who petitioned the Presiding Member of the Assembly to investigate the matter. Members of the assembly also demanded that Naura Adjei be removed from office and the substantive Procurement Officer, Ms. Aidoo retained. The Assembly members succeeded in booting out Naura but are yet to recover the monies. 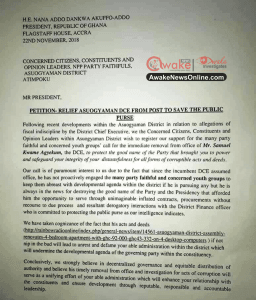 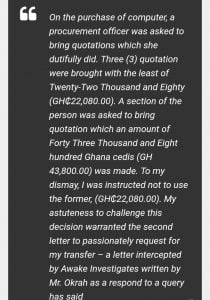 Some citizens of the District have also petitioned President Akufo-Addo calling for the removal of the DCE. A copy of the petition obtained by Awake Investigates said:

Conclusively, we strongly believe in the decentralized governance and equitable distribution of authority and his timely removal from office and investigation for acts of corruption will serve as a unifying effort of your able administration which will enhance your relationship with the constituents and ensure development though reputable, responsible and accountable leadership 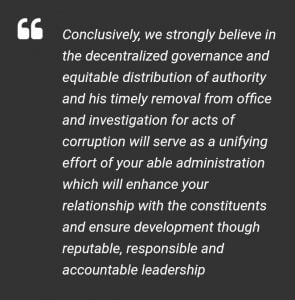 Stay tune us we bring you more of rot from the Assembly.