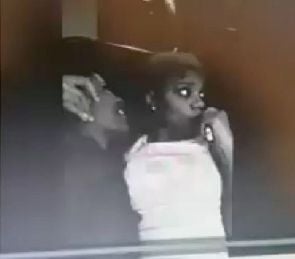 Ebony together with her best friend, Francisca Yaa Nkansah popularly known as Franky Kuri, a military guide, Francis Atsu Vondee died in a gruesome car accident in the Sunyani Kumasi road after their 4×4 Jeep collided with a VIP Passenger bus on Thursday, 8th February 2018.

After her death, a lot of stories have circulated in the media about Ebony Reigns but the most damning of all the rumors was started by Prophet Nigel Gaisie.

According to the prophet, God told him to caution Ebony against lezbianism or else he will strike her down.

Immediately after the revelation, rumors started flying around on social media that the lady who died with Ebony, Frank Kuri was Ebony’s lezbian partner.

Although Ebony’s manager, Bullet came out to rubbish the lezbianism tag, a video is now circulating on social media alleging to be Ebony Reigns and Frank Kuri.

In the video, the Ghanaian ladies that it’s been alleged as Frank Kuri and Ebony could be seen kissing and romancing passionately.

The video of Frank Kuri Ebony kissing is fast going viral even though their faces are not showing clearly.

Watch the video for yourself and let us know if it looks like its Frank Kuri Ebony kissing.

VIDEO: Ebony’s yet to be released gospel video pops up on social media