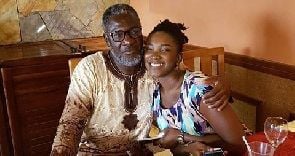 The family of late musician Priscilla Opoku-Kwarteng known worldwide as Ebony is not happy about the numerous talks about the deceased.They expressed their discomfort on Saturday when Mzbel, Afia Schwarzenegger, and Tornado visited them at Dansoman, a suburb of Accra.Angry Afia Schwarzenegger during a conversation with the family pleaded with them to sue men of God who have planned to cash in on the death of Ebony.According to her, these prophets who claim they saw the demise of the ‘Sponsor’ singer before it happened have constantly been tarnishing the image of the dead body so one of them should be used as a scapegoat.Schwarzenegger rebuked the Founder and leader of the True Fire Prophetic Ministry (TFPWM), Prophet Nigel Gaisie for calling the Ruff Town Records/Midas Touch artiste a chronic lesbian.
She questioned the essence of calling Ebony a lesbian because she did not showcase her boyfriend to the world.Nana Poku Kwarteng, father of the singjay after listening to the TV and radio presenter’s plea promised to take legal actions against them but after things are calm.When he asked if there is evidence to Afia’s claim, the outspoken mother of three replied that she has a video of Prophet Gaisie accusing the 90’s bad girl of lesbianism.Valentina Nana Akua Agyeiwaa as she is known in real life went out of control and described the actions of the numerous prophets as foolishness.Ebony died on February 8 this year on the Sunyani-Kumasi road in a fatal accident when returning from Sunyani. She had gone to visit her mother and other family members.
Watch Ebony’s family’s heated conversation with Mzbel, Afia Schwarzenegger and Tornado on Saturday, February 17 below:
Source: zionfelix.net
Facebook
Twitter
Pinterest
LinkedIn