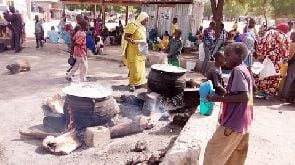 At least five people have been killed and more than 40 others injured in
a suicide bomb attack at a camp for internally displaced people (IDP)
in northern Nigeria.

Suspected Boko Haram suicide bombers on Wednesday night detonated
explosives inside the Dalori IDP camp – the largest refugee settlement
in the city of Maiduguri, in Nigeria’s northeast state of Borno.

Eyewitnesses and rescue workers say a female suicide bomber entered the
camp and detonated an explosive, killing herself and five other people,
and injuring dozens more.

People close to scene say the death toll is likely to rise given the number of serious casualties.

A second suicide bomber detonated his device at the entrance of Dalori residential quarters.

It follows an announcement from Nigeria’s army that it is constructing a
road into Sambisa forest, the Boko Haram militants’ stronghold.

The military’s repeated claims that it has defeated the group are being
questioned after a spate of attacks by the insurgents, targeting mainly
civilians and using young female and male suicide bombers.

The camp has been targeted several times in the past, the worst was in January 2016, when at least 86 people were killed.

Yesterday, six villagers were killed and 13 injured when a suicide bomber struck in the Konduga area of Borno state.

7th Foklex Media Awards: My Move From B/A Is An Opportunity For Others To Win – Grandmaster DJ Murphy Lee