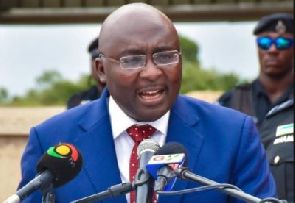 Vice President Bawumia went to town yesterday with revelations on how a bauxite company in the country has been operating for the past five years without declaring profits (dividends).This was when he addressed a ‘Fiscal Management of Mining and Petroleum Resources in West Africa’ conference, put together by the Africa and Fiscal Affairs Department of the International Monetary Fund (IMF).RevelationsHe noted, “In Ghana, the major mining firms have been assaying gold mined from their mines by themselves before export, even though the law empowers the Precious Minerals Marketing Company to do so.”He, however, added, “We must be careful not to impute, and no such thing is being alleged; it is simply not acceptable that for a very long time an institution of state with the powers to help in properly accounting for our mineral resources was not enabled nor allowed to perform its job. This has to change.”Dr Bawumia went on to say, “I know of a bauxite mining company that over the last five years has paid no dividends to government because it claims it has made no profits, yet it continues to mine vigorously.”Even though he fell short of mentioning the name of the company, it is obvious that that happened under the erstwhile President Mahama’s National Democratic Congress (NDC) administration.ConcernsDr Bawumia identified the issue of improper accounting for extractive resources on the part of concessionaires as a major source of revenue loss for African countries, with significantly negative fiscal implications.That, he said, was because “No fiscal management system of mining and oil revenues can be robust without including measures aimed at properly accounting for the resources extracted as the recent experience of Tanzania has shown.”The veep recalled how in March last year, the new government of President Magufuli ordered forensic chemical examination of container-loads of copper and gold concentrates which were being shipped out of Tanzania.The examination, he said, though disputed, revealed that the containers had more than 14 times the quantity of gold reported by the mining firms.MeasuresDr Bawumia indicated, “In Ghana, we are considering a progressive process which will hopefully require the refining of a significant proportion of all gold ores and cocoa beans locally in about five years.”That, according to him, would not only create private sector jobs and ease the pressure off the public sector, but also “increase the potential sources and value of resources for government spending on critical infrastructure and social services.”