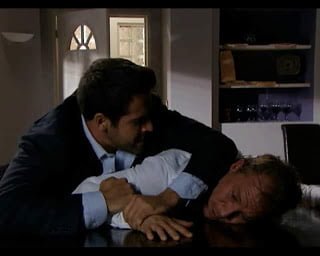 Amaya reveals how hateful he is about Lucrecia and Cesar and she is also curious as to why Mauro now wants to get divorce from her and she decides to look into it and find out why.
Eloisa and Mauro go get Juliana from the hospital while Amaya stays with the children.Horacio manages to enter Aaron Negro’s apartment, while he’s buying a ticket to Monterrey because he bribed the security man to let him in.Cesar occupies his father’s seat to have lunch with his mum and Lucrecia compliments that he looks really great in that seat and he assures Lucrecia not to worry because soon he will be in control of Nescafe because with his shares and that of her mum’s, they have the majority of shares in the company and that means they will be making decisions and the decisions of his siblings will be nothing.Valeria complains to her mother for forcing her father to sign the papers allowing her to leave the city. Alan tells Vale he’d like to travel with her for the exchange program and this makes her very happy.Max and Constanza decide to go to “El Paraiso”.Juliana tells her father and Eloisa she has been suffering from a poisoning symptom. Taking her to the hospital for checkup, the doctor tells them that the results reveals

Hector decides to go look for his son and Mariana to “La Tormenta” farm.Aaron tries to contact Cesar to inform him about Horacio’s attack on him but in great annoyance, Horacio hits Aaron Negro for being Cesar’s partner and making a fool out of him and he hits his head on a sharp object and unfortunately, he couldn’t make it and dies and all these while, Cesar was on the phone hearing Horacio saying that “he can’t be dead and that he should wake up because he is not a murderer”. Cesar commands him to pick up the phone and he asks about the situation and he told him about Negro’s death. He then commands him to leave immediately and go back to him home and not allow anyone to see him.Efrain informs Ulises that his coffee plantations have a plague and he decides to sell the farm so not to go bankrupt.Carmela (the new maid) tries to get in touch with Amaya but unfortunately, Amaya wasn’t there and so Carmela leaves a message to the secretary to tell her that her sister Mariana called. She then says maybe it could be true that Mariana isn’t lying but the one lying is their boss.The doctor informs Juliana he has to operate on her because that substance has affected her left ovary and if the operation is not done soon as possible, it can spread to her fallopian tube and her uterus.Cesar goes to speak with Horacio in his apartment about why he went to Negro’s apartment and he tells him about everything which is to go get his money which the both of them fooled him and took from him and that is all of his savings he’s saved his entire life but Cesar questions him if it is his money or Amaya’s because he knows he transferred the money in Emma’s name to steal the money from Amaya. He threatens him that he has him in his hands now and his future depends on him now that he is a murderer. Cesar then asks him to be his slave and he accepts because he won’t report him to the police.Mauro assures Eloisa she’s very important to him.Ivan dreams of being with Mariana and after telling Yaayaa about the dream she tells him it’s all a fantasy and same time Mariana is determined to escape from Ulises no matter what. Carmela (the new maid) brings her her dinner but leaves a message in the napkin telling Mariana that she called Amaya but she wasn’t in and that she will call the next day. This really makes Mariana very happy.Hector runs into Rebecca in La Tomenta ranch and sees that she is her wife who abandoned him and their son.Lucrecia tells the lawyer who is handling the divorce on her part to ask Mauro for 50% of what he has before she sign the divorce papers.Carolina leaves a note to Lucrecia pretending to be Florencia and Lucrecia becomes very much nervous.

VIDEO: Shatta Wale is next to die – Prophet reveals