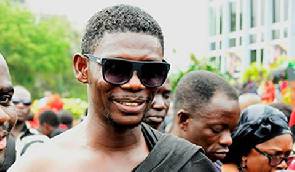 Popular Kumawood actor, Agya Koo, has pointed accusing fingers at some movie producers for his inactivity in the movie industry these days.

According to him, he has not been prominent in movies lately because some Kumawood producers have conspired to deliberately sabotage him.

Explaining his claim, he said the producers, whose names he failed to mention, plotted against him after he refused to pose naked in the popular ‘Komfo Anokye’ movie.

Speaking at the launch of his new mobile app, Agya Koo 2CTV on Sunday, he noted that despite their decision not to cast him in movies, he was still doing very well because his career has been blessed by God.

In his view, he is still the most popular Kumawood actor around and not even the equally popular actor Kwadwo Nkansah aka Lil Win. He added that when it comes to comedy in movies, all the others, including Lil Win, can only dream to reach my level.

Court sentence 3 to 60 days each in jail