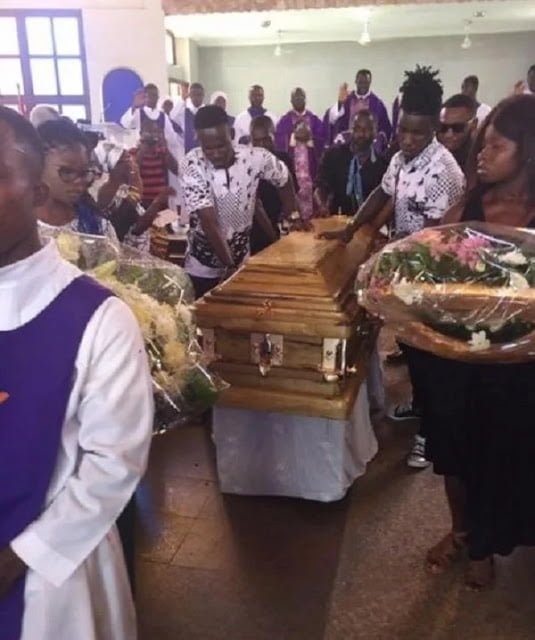 The mortal remains of Ebony’s friend, Franky Kuri, were laid to rest at the Achimota Cemetery in Accra on Saturday, March 3. Her internment followed a burial service at the Prince of Peace Catholic Church at Kwashieman in Accra. At the somber burial service were family and friends of the late Franky Kuri including her old mates from the Holy Child Past Students Association.
Also present were Ebony’s parents, Nana Opoku Kwarteng and Beatrice Oppong, and renowned evangelist Reverend Dr. Lawrence Tetteh. Born Franklina Maame Yaa Tebua Nkansah, Franky Kuri was known to have been a close friend of Ebony.
Rev. Dr. Lawrence Tetteh Photo credit: SVTV Having accompanied Ebony to visit her mother at Sunyani on the fateful February 8, Franky died alongside Ebony and her soldier body guard, Francis Atsu Vondee. The car they were travelling in collided with a VIP bus around Manakranso on the Sunyani-Kumasi road while returning to Accra.
Franky, who graduated from the Holy Child SHS in Cape Coast in 2008, would have been 28 in May, 2018. Meanwhile the funeral of Ebony, scheduled for March 17, is facing a possible postponement. According to Ebony’s father, Nana Opoku Kwarteng, the family was facing challenges with securing the Independence Square as the venue and may have to postpone the funeral or look for another venue.
Family of late Priscilla Opoku-Kwarteng, including her dad, Mr. Nana Opoku Kwarteng and mom, Madam Beatrice Opoku were spotted in the church building commiserating with the bereaved family of their daughter’s (Ebony Reigns) friend. was also present at the funeral.Franky Kuri is going to be buried in the Achimota cemetary. After the church service for the late Franky Kuri was over, Mr. Nana Opoku Kwarteng revealed that the preparations for his daughter’s funeral were nearly completed.
He added that he was overwhelmed by the love and support Ghanaians had shown to his ‘queen’, Ebony even in her death. He added that the immense love shown them in their trying times was a testament of how a lot of people loved and cherished Ebony while she was alive. Spokesperson for the family of the late dancehall act revealed that they were going to call for a press briefing as soon as they are done preparing for the final funeral rites of their late  Accra.
During the One Week Memorial held for the artiste, it came to light that the final funeral rites were going to be held on March 17 at the Independence Square in Accra.Franky Kuri died in a gory accident on the Sunyani-Kumasi road while returning to Accra from Sunyani. Her childhood friend, Ebony Reigns and Lance Corporal Francis Atsu Vondee, who posed as a bodyguard also died in the car crash.

Video: I never had a ‘sexual’ relationship with Stonebwoy – Mz Vee