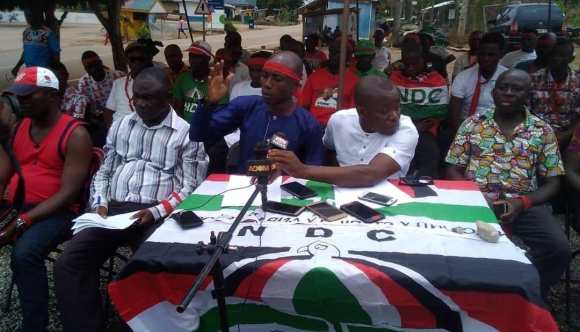 Hundreds of supporters belonging to the National Democratic Congress (NDC) in the New Edubiase Constituency in the Ashanti Region say they cannot continue with the party, barely a day to the parliamentary primaries.

The New Edubiase seat was been held by the NDC since 1992 until then Member of Parliament, Ernest Kofi Yakah lost it in the historic defeat to the now Deputy Minister for Food and Agriculture, George Oduro in the 2016 elections.

At a press conference on Thursday, a former Constituency Organizer who is the leader of a group of supporters who claim they number about 5000 across the 104 polling stations in the constituency, Frank Obey Dzata said they would not allow the “imposition of Abdul Salaam Adams as the sole candidate in the constituency in Saturday’s parliamentary primaries”.

The group says they are unable to support the party if the leadership is bent on fielding a “traitor who openly campaigned for the then opposition New Patriotic Party (NPP) in 2016 and doled out money to loyal NDC members to vote against their own party; a situation they was the major cause of the party’s defeat for the first time since 1992.

“We are telling the national executive that we don’t recognize Abdul Salaam Adams as NDC parliamentary candidate for the New Edubiase Constituency and we are also assuring the national executives that, the skirt and blouse Adams and co introduced in 2016 is going to increase from 4000 votes difference to 10,000 votes difference for the NPP in 2020 if Abdul Salaam Adams is maintained against our will”, the group said in a press statement.

The NDC upcoming parliamentary primaries will be held in 157 constituencies across the country. 524 aspirants have been cleared to contest in the polls come Saturday, August 24, 2019, the party has announced. The party also says it has put on hold elections at the Asawase and Ellembelle constituencies as well as three other constituencies due to petitions by some of the aspirants.

No elections would be held in 39 constituencies, because some incumbent members of parliament and aspirants are standing unopposed.