Private legal practitioner and an influential family member of current President, Gabby Asare Otchere-Darko says he is tired over strenuous attempts to link him to one thing or the other under the current administration.

He thinks that no story in the country is ever complete without the association of his name stating that he is tired [Gabby abr3!]

In a tweet, the cousin of President Nana Addo Dankwa Akufo-Addo out of frustration over the name-calling said “What is it about the name Gabby Otchere-Darko that it appears no story is complete without it? Now, I hear, apart from working for Interpol, I am also a demolition man. Gabby abr3!”

But a Twitter user only identified as Lenthini gave a savage reply “What’s about your name that everyone seems to associate with crime? You mean apart from the fact that you’re shady and cunning crook whose only job is pull strings in crooked deals to get your cut? NOTHING.”

Late last week, host of “With All Due Respect – Loud Silence Media” Kelvin Ekow Taylor claimed the Attorney General and many others who wanted to separate the president of Ghana from Nana Appiah Mensah alias NAM 1 like Gabby Otchere Darko and many others hatched a scheme to bring him down.

According to Ekow Taylor, the first person Horizon Royal Diamonds contacted when they came to Ghana to file fraud charges against the two men who defrauded them [Adewoye Olorunfemi Adetunje, a Nigerian and Charles Opoku Darko, a Ghanaian] was renowned lawyer, Ace Anan Ankomah.

Ace Anan Ankomah has since denied the allegations and threatened to pursue the matter legally against Kelvin Ekow Taylor.

What is it about the name Gabby Otchere-Darko that it appears no story is complete without it? Now, I hear, apart from working for Interpol I am also a demolition man. Gabby abr3!

I’m beyond bashing, only fools will insult me – Badu Kobi tells critics

Mon Jul 29 , 2019
The Leader and founder of Glorious Wave Church International. Prophet Emmanuel Badu Kobi, has described those who were insulting him over his comments about Ashanti, Fanti and Ewe women as fools. In a latest video cited online by GhanaWeb, the Prophet stated behind his pulpit Sunday morning that he is […] 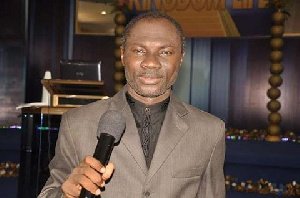