The Leader and founder of Glorious Wave Church International. Prophet Emmanuel Badu Kobi, has described those who were insulting him over his comments about Ashanti, Fanti and Ewe women as fools.

In a latest video cited online by GhanaWeb, the Prophet stated behind his pulpit Sunday morning that he is beyond social media bashing, and that nothing destroys human beings than an inherited attitude.

He said: “Those who are wise started asking me questions but those who are fools started the bashing.”

Prophet Emmanuel Badu Kobi in an early video had stated that women who hail from the Ashanti region are greedy, materialistic, disrespectful and money-conscious all other things being equal.

According to him, “Ashanti’s, their eyes red (greedy), looking for property, looking for things to carry back [home]. Their mother is at the corner, influencing everything. I have done my research…. If my daughter is going to marry, I will tell her, if you want to go and be driven back, go and behave like an Ashanti girl. The Ashanti men are there, I am telling you, Ashanti women don’t respect Ashanti men, especially when you are broke, (they will tell you). You, you, who are you? She will dress you from the top because the mother is always talking with her. I am telling you the truth, I am telling you the truth ooo!”

“Fanti women are foolish sometimes and Ewes too are doormats. But for Ashanti women, no!” the Prophet said in his sermon to his congregation.

He then advised possible suitors not to import problems for themselves forever by marrying women from the Ashanti region.

This, he said is according to a research he had conducted and the results prove to be so.

Those persuading me to resign are ‘corrupt’ – Martin Amidu snarls

Mon Jul 29 , 2019
Martin Alamisi Burnes Kaiser Amidu, Ghana’s Special Prosecutor has taken on those persuading him to resign from his current position in the midst of accusations he is not living up to expectation. According to him, he considers anybody who approaches him to persuade him to resign as fuelling corruption by […] 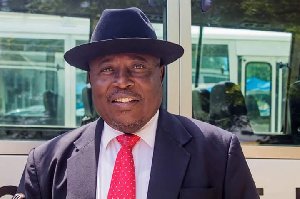