In a video sighted by zionfelix.net, the Founder and Leader of Power Embassy International said Afia Schwar has been able to survive the many traps set on her path because of her last child.

Pastor Prince hinted most invitations given to the comedienne/media personality are death traps but her enemies are not able to execute her due to the presence of her daughter known as Adiepena in her life.

According to the Pastor, many meetings have been held to eliminate Afia, masterminded by a man and a woman who she is no more in talking terms with.

He revealed further that she would have been poisoned if she attempted to be at the meeting that was supposed to settle the differences between her and those people.

Afia Schwar confirmed such a meeting was called but he didn’t honour the invitation by the mediator because she had a bad dream about the meeting.

He disclosed that Schwarzenegger’s daughter, Adiepena is an angel and not a mere human being.

Pastor Prince prophesized a breakthrough will come the way of Afia Schwarzenegger and it will shut the mouth of people and God will change people perception about her.

Wed Nov 27 , 2019
As you start to walk out on the way, the way appears, that is exactly what Valentina Nana Agyeiwaa known as Afia Schwarzenegger has done when she paid a visit to Prophet Prince Elisha Osei Kofi, Leader and founder of Power Embassy International Church. In a video received by sammykaymedia.com, […] 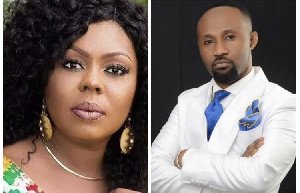