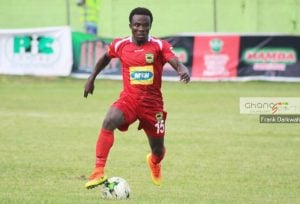 Deputy captain of Asante Kotoko Augustine Sefa is motivated by the words of the Patron of the club Otumfuo Osei Tutu II after the team’s visit to his palace.

Sefa who was confirmed as the new deputy skipper for the club stated the players are motivated by the advise given to them by the life patron of the club.

He also revealed the words of the king will be their guide for the CAF Champions League. Sefa also remained optimistic the team won’t let the king down this time around.

“It’s always refreshing coming to see the life patron of this club, Otumfour has advised us a lot and gave us encouraging words too”

“Those motivational words are going to be our guide throughout this year’s Caf Champions league campaign and hopefully we won’t let him down” He told footballmadeinghana.com

Kotoko will face Kano Pillars of Nigeria on August 10 in the first leg of the preliminary round of the CAF Champions League.