A woman collapsed in a sanitation court room upon hearing she had been found guilty in what city authorities call “trading at unauthorised location and in an insanitary condition.”

Edna Mensah who is a trader at the Agbogbloshie food market in Accra and 11 other traders were convicted separately on Tuesday by the Adjabeng Magistrate Court in Accra for acting contrary to  provisions  in the Public Health Act 851 2012 and the AMA Bye-law 2017.

She was quickly rushed to the Adabraka polyclinic for medical attention.

The court also convicted Poko Samuel, Yussif Ibrahim and Thomas Mangibi for open defecation and deferred the sentence and remanded in custody at the Accra Central Police Station to reappear on the 7th August 2019.

Prosecuting Officer, Nii Okine Aryee, told the court that the 12 traders were initially served notices to abate the nuisance but failed to adhere upon re-inspection hence the court action adding that, the other 3 were also arrested by the Accra Metropolitan Assembly (AMA) Sanitation Taskforce between the early hours of Tuesday morning openly defecating in parts of the city.

Head of the Accra Metropolitan Assembly (AMA),  Public Health Department,  Madam Florence Kuukyi,  in a remark after the verdict said it was against the Public  Health Act and the Assembly’s bye -laws for anyone to sell , prepare,  package,  convey ,store or display for sale,  food under insanitary conditions.

The Assembly’s Control of Hawkers Bye-laws 2017 mandates an occupier of a space or selling site to be responsible for maintaining the cleanliness of the space by thoroughly sweeping and cleaning each day.

She said a person commits an offence under the AMA Sanitation Bye-laws 2017, if that person defecates in the open, drains, or one’s compound or indiscriminately dumps solid and liquid waste in open spaces, gutters, behind walls or burns solid waste in one’s compound.

“As Ghanaians we are very religious in professing our faith hence we should not forget that cleanliness is next to godliness, ” she admonished.

She said Deuteronomy 23: 12- 14 (Contemporary English Version) states that to “you must keep your camp clean of filthy and disgusting things. The Lord is always present in your camp, ready to rescue you and give you victory over your enemies.

But if he sees something disgusting in your camp, he may turn around and leave.

Madam Kuukyi added that, Quran 2:60 also entreat “all Muslims to eat and drink from the provision of Allah, and not to “commit abuse on the earth.

Fri Jul 26 , 2019
The National Womens organiser of the ruling New patriotic party (NPP), Madam Kate Abena Gyamfua has assured that her office will work hard with the country’s security agencies to make sure justice is served to Hajia Zeinab, the NPP Asawase constituency activist who was beaten by the Asawase MP, […] 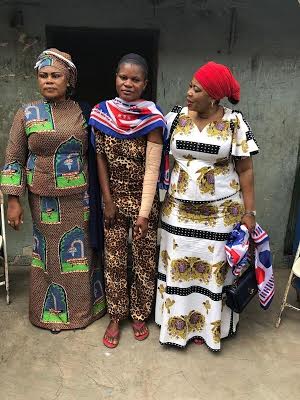