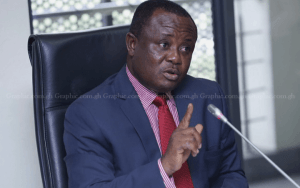 Not long ago the first vice chairman of NPP, Mr Fredrick Fredua Anto made the pronouncement that some of the NPP MP’s are very relevant and vital for the party so they shouldn’t be contested by any one on upcoming primaries.

He suggested that the Majority leader of parliament Osei Kyei Mensah Bonsu who is also an MP for Suame Constituency, Joseph Osei Owusu (Joe Wise) MP for Bekwai Constituency and other MP’S who are occupying high positions in Ghana and playing an integral role in the New Patriotic Party should go unopposed so that in 2020 based on their hard works NPP can maintain the seat of the President.

These decisions has triggered a group of party faithfuls numbering over 1000 from the Bekwai Constituency calling on the national executives to rescind their decision of representing Joseph Osei Owusu (Joe Wise) in the 2020 parliament primaries.

A spokesperson for the group doubling as polling station chairman for Dominase electoral area Seth Amoako Mensah told journalist that the MP for the Bekwai Constituents in his delivery has disappointed and failed residence and NPP party as a whole.

He said the residence are tired of his empty phrases for the past 12 years and feel should be replace with a visionary and generational thinker who will take them to the promise Land.

“We haven’t seen any developmental projects from our MP since he was elected for the past 12 years.
We will not consider nor give him another chance”.

According to him, the presence of the MP for the area at polls in 2020 might make the NPP loose it strong seat to the opposition NDC which is likely to affect the general election.

“If the executives imposes Joe Wise on us we the people of Bekwai Constituency will rally against him”.
The statement of the people.

They are on their stands by pleading to the executives to organize free and fair elections during the parliamentary primaries to allow everyone exhibit his pr her potentials other than making a wrongful decisions.

Tarkwa Road Will Be Fixed In 2 Weeks – Regional Minister

Thu Jul 4 , 2019
The Western Regional Minister, Kwabena Okyere Darko Mensah who doubles as the MP for Takoradi Constituency has assured residents as well as indigenes of Tarkwa that government will be fixing their deplorable roads in two weeks. He made the promise on Tuesday, July 3, 2019 when he visited the western […]