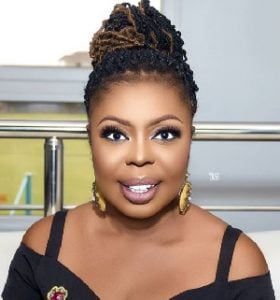 Renowned media personality and comedienne Afia Schwarzenegger born Valentina Osei Agyeiwaa has delved into Wendy Shay’s car registration brouhaha.
It was reported on several tabloids a few days ago that the Afropop singer had purchased a jeep wrangler which was customized in her name.

The ‘bedroom commando’ crooner’s new car had the DVLA registration number as ‘SHAY 23-19’.

Later, there was an allegation that the number plate of Wendy Shay’s newly acquired jeep wrangler was not registered with DVLA.

The allegation was made by Ghanaian blogger Chris Vincent.

Afia Schwarzenegger has also threatened Wendy Shay to expose the truth behind the owner of her new Jeep Cherokee purchased by the ‘Uber Driver’ crooner.

According to Afia Schwarzenegger, the car was given to the Rufftown Records signee as a donation and it was already registered so her ‘customized registered’ DVLA number is fake.

She made this revelation on her programme ‘Atigya’ on Schwar TV.

Afia Schwarzenegger disclosed that Wendy Shay can never afford such an expensive car with her ‘scanty’ music income.

She indicated that the singer is just deceiving Ghanaians and need not be taken seriously.

She further indicated that upon confirmation from the Drivers and Vehicles Licensing Authority (DVLA) she had been told that the registration of the car (SHAY-23-19) is fake.

Afia opined that Wendy Shay photoshopped the customized car number to the photo of the car she flaunted on social media.

“…we’ve called DVLA, they say the car number SHAY-23-19 is fake… As for Wendy Shay which music has she sold to afford such a car. If you dare me I’ll mention the owner of the car. Do you know the price of a Jeep Cherokee? “Afia quizzed.

“… When you’re 23 you think as such, she has just photoshopped the car number to it… I know they didn’t buy that car because it was donated to them. Wendy Shay hasn’t got that kind of money’’ she further indicated.

Afia Schwarzenegger explained that the DVLA did not want to embarrass the musician hence the reason they had not come out to state that the car number was fake.

Wendy Shay recently was castigated after she was quizzed the benefits she had derived after joining Rufftown Records label.

The songstress disclosed that she could now buy smartphones like iPhone X and iPad.

Her response amazed Ghanaians as she was blasted for her response.

NewsBibiani: NPP delegates decides to endorse Obeng Boateng as their next parliamentary candidate

One thought on “Wendy Shay! Dare Me And I Will Show Ghanaians The Owner Of The Car- Afia Schwarzenegger”