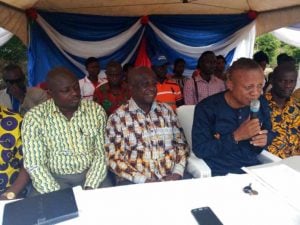 Bosomtwe Constituency executives of the ruling New Patriotic Party (NPP) in Ashanti region have vowed to engage in a collision course with some greedy members of the party who are on an agenda to sabotage the work of Ashanti Regional minister, Simon Osei Mensah.

According to Bosomtwe constituency Chairman of the party, strictness of the regional minister in handling government business in the region makes it difficult for some individual to amass worth in government name to the detriment of the citizenry.

This according to him, Chairman Aikin is a motivating factor to why some members of the party through their financiers have started scheming for his removal promising them a double dose of their own medicine.

It was alleged that Mr Simon Osei Mensah allegedly made an ethnocentric comment against Northerners in the said audio in reaction to the opposition NDC’s Joshua Akamba engagement with students of the Tempane Senior High School over the Free SHS Programme.

But in a statement, Hon. Simon Osei Mensah denied ever making such malicious and tribal inciting comments.

Several weeks after the incident, his constituents believe the said tape was manufactured by some members of the party in the Ashanti after they conducted their own investigations.

Bosomtwe constituency chairman, Addai Poku Aikins, threatened to disclose the faces behind the said tape if they persisted in their deliberate attempt to run an upright man down.

The defects at the Kumasi International Airport