The Akufo-Addo government will not use taxpayers’ money to pay clients whose investments have been locked up with gold-trading firm Menzgold Ghana Limited, a statement issued by Information Minister Kojo Oppong Nkrumah, has said.

Menzgold has been struggling to pay its tens of thousands of customers after it was asked to stop its gold vault market operations by the Securities and Exchange Commission (SEC) over regulatory infractions.

That order followed several cautions to the public to desist from engaging in business transactions with Menzgold by the Bank of Ghana as it said the gold dealership firm was not licensed to take deposits.

The aggrieved customers have held several demonstrations to pile pressure on the government to intervene so they could get their money. One of such recent demonstrations took place in Kumasi.

The government, in the statement said: “Menzgold was not licensed by BoG or SEC and its operations were not regulated by BoG or SEC. This warning was made as far back as April 2016, and, unfortunately, was disregarded by many customers of Menzgold. BoG and SEC are, therefore, not clothed with any legal mandate to refund monies to clients.

“In the case of banks and specialised deposit-taking institutions, as well as asset management companies licensed and regulated by BOG and SEC, owing to the fact that these companies were regulated by BoG and SEC, the regulators are clothed with the legal mandate to intervene in their matters, in accordance with law. DKM, for example, was licensed by the BoG, the reason for which it stepped in to help retrieve the monies of depositors. In the case of Menzgold, it operated as a trading company and falls outside the scope of the regulators’ intervention,” parts of the statement read.

It continued that “while the government sympathises with customers on the difficulties encountered in their transaction with the company, the State cannot and will not resort to the use of taxpayers’ monies to refund customers monies.

“The government wishes to inform the general public that the security agencies, having received reports from customers that they believe they have been defrauded by false pretences, shall employ all the powers of the State to find the accused persons, investigate the allegations, and ensure that the law takes its course in this matter.”

Fri Jan 11 , 2019
A woman who happened to be on board a taxi caught during a crossfire between police and some suspected armed robbers at Esuekyir near Ankaful in the Central Region has lost her life. She was hit by a stray bullet. Her husband, Aboagye Okyere, 47, who was also on board […] 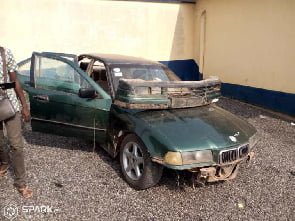