Ghana legend, Mohammed Ahmed Polo, has reiterated that the Black Stars will need to have a potent and competent striker to be able to win the 2021 Africa Cup of Nations (Afcon).

The senior national team, the Black Stars dominated the local media for the wrong reasons after failing to score a single goal in the two friendly games played in the month of June 2021.

Ghana lost to Morocco in Rabat before sharing spoils with Ivory Coast at the Cape Coast Stadium.

Having booked a qualification for the Afcon next in Cameroon, President Nana Addo Dankwa Akufo Addo has tasked the team to end the country’s 39 years trophy drought.

And according to Polo, who is a former Hearts of Oak gaffer believes the team will only conquer Africa with a competent striker.

“The only thing is, though I don’t know where n how we can get one, but we need a standing and competent striker,” the 1978 Afcon winner told Kumasi FM.

“A striker that can disturb the defense of our opponents because looking at our current strikers, we don’t have one.”

“We just need a complete striker, who can put fear in the defense line of the opponent, which will make it easier for our other strikers or players to score,” he added.

The 2021 Afcon has been scheduled to kick off next year.

Fri Jun 18 , 2021
The Speaker of Parliament, Alban Bagbin, has cautioned the leadership of both majority and minority against springing surprises on him while presiding on the floor. The caution follows some dramatic scenes on the floor Thursday evening during the presentation of the report of the Appointments Committee on some 12 deputy […] 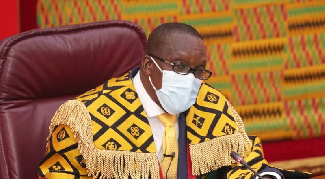