There have been  broad smiles on the faces of Joseph Wise (Uwonda) Laryea and Jewel (Jewnart) Nartey recently   and that’s largely because they have gained nominations in three categories  at the upcoming  Emerging Music Awards (EMA).

The two guys make up the U2Jay outfit and the song that earned them the nominations in the  Most Popular Song of the Year, Hiplife Artiste of the Year and Hiplife Song of the Year categories was Chorkor Beyonce  featuring Nii Funny.

It is a danceable, up-tempo piece  that teases a guy who dumps his lover only for someone else to pick her up and make her his ‘World Cup’.  According to  Uwonda and Jewnart, the track was done basically to tell  guys to  cherish their women and not let go of them for any kind of  flimsy reasons.

The EMA, organised by Kusstar Entertainment, was launched last April to recognise and support up-and-coming artistes. There are 26 categories in the competition.

“We are glad Chorkor Beyonce has caught the attention of the organisers. We know it is a good track and hope it clinches, at least, a couple of the awards,” U2Jay said. “A lot more people have become aware of us since the nominations were announced and that’s good for our brand. We know we are competing against lots of talented young acts like us but we hope for the best.”

The duo is based at Nungua in Accra and have  shared stage with names like Samini, Koo Ntakra, Nii Funny and Shatta Wale. They are a consistent group with songs including  Eye Normal, Odo Na Eye, Police, Na True, See My Baby, No Be China, Nungua Mango, By The Way and  Blue Balls released over the last three years.

“We appreciate it is a tough showbiz  world out there but we are determined to hang on and succeed. The EMA is a brilliant idea and we hope to be among the winners at the maiden edition,” Uwonda and Jewnart said.

Thu Aug 15 , 2019
A vociferous member of the New Patriotic Party popularly known as Hajia Fati in a fit of rage has alleged that most of the cars meant for auction to the general public are doled out to family and friends by the Chief of Staff Frema Opare and others. According to […] 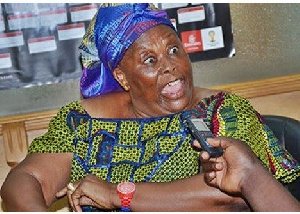