Martin Alamisi Burnes Kaiser Amidu, Ghana’s Special Prosecutor has taken on those persuading him to resign from his current position in the midst of accusations he is not living up to expectation.

According to him, he considers anybody who approaches him to persuade him to resign as fuelling corruption by obstructing him from performing his duties.

“Those who know my track record in public office over the decades know that no Member of the Council of their Elders would dare speak to me on resigning my public office as the Special Prosecutor. Anybody who approaches me to persuade me to resign my office will be considered to be obstructing me in the performance of my anti-corruption duties as the Special Prosecutor. This time the Office of the Special Prosecutor will handle the matter by itself and not farmed it out to another law enforcement office so that the case will also lie fallow again like the previous widely published complaint and complaint statement of obstruction I lodged for investigation”, he revealed in his latest epistle sighted by MyNewsGh.com.

He added that there are some persons within the NPP and NDC who will rejoice of news of his resignation or his sackbut served notice that it is never going to happen as far as he is concerned.

“The concerted efforts by the political elite to distract me from the duties of my office with calls for me to resign will not move me to abandon the electorate who made the establishment of the Office possible. I also know that there are lots of people in both the NDC and the NPP who would be too happy to hear that I have resigned or been removed from office. I know further that when the President brought up my nomination he faced serious opposition from his own, just like the Asiedu Nketias of the other side also did, but he insisted he wanted an impartial person like me for the job. Watch the TV news on the various stations on 4th June 2019 and you will see the number of NPP MPs who opposed any prosecution of any Member of Parliament for corruption. I have written already on the bi-partisan position of the Leadership of an NPP Majority Parliament under a Pastor Speaker”, he revealed.

Mon Jul 29 , 2019
Lucy Anim Koryo , a parliamentary aspirant of the party in Suhum constituency of the Eastern Region has threatened to do the unthinkable in 2020 by stripping naked if dared by the New Patriotic Party’s (NPP’s) candidate who is the incumbent, Hon Fredrick Opare Ansah. The candidate disclosed that the […] 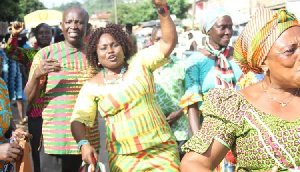