During court proceedings on Wednesday, she revealed that the suspects used a language that is related to kidnapping and blood sacrifice.

The two suspects have been charged with six counts of “conspiracy to commit crime to wit kidnapping and “kidnapping.”

The State Attorney told the court that the revelation of their interaction was noted on the mobile phone of second accused, John Oji, after Police arrested him on 4th June 2019 at Aflao around the Ghana-Togo border.

“Facebook chats from his mobile phone between A1 and A2 revealed coded language on kidnapping and blood sacrifice as well as discussions on drugs which could be administered to victims to stupor,” she said.

Continuing her statement to the Sekondi High Court, she also revealed various mobile phone numbers that were traced to the two accused persons after using it to receive money from victims’ relations, the Chief State Attorney said.

“On 6th June 2019, John Oji, in his investigation caution statement stated that he came from Nigeria to Takoradi in the first week of December 2018 to see Sam Udoetuk Wills, who is the first accused, upon invitations from him. Oji admitted that he knew the two mobile numbers used to receive ransom from parents by Wills. That he used to communicate and WhatsApp Wills on same.”

The two accused persons, however, pleaded not guilty to the six counts of charges by the Chief State Attorney, Patience Klinogo, in her amended charge sheet.The Presiding Judge, Hanna Taylor, however, adjourned the case to 16th October to allow the State Attorney to serve the accused persons with the charge sheet and the statement of fact as well as present any other witnesses or exhibits at the next sitting.

One of the aggrieved parents who was not amused by the proceedings and delays in seeing her kidnapped daughter reunited with her attacked one of the accused persons just outside the courtroom.

It took the intervention of the police to rescue the accused from the heckling.

Musician Aseibu Amanfi narrates how he escaped from Rawlings’ 'trap'

Wed Jul 31 , 2019
One of the most controversial musicians Ghana has ever had, Aseibu Amanfi has recounted how some soldiers were sent after him during the reign of Jerry John Rawlings. Aseibu Amanfi, known to have composed and performed ‘Ka Na Wu’, a song full of innuendos in an interview on Kofi TV […] 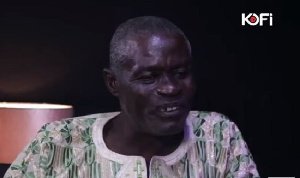