The Special Prosecutor, Martin Amidu, has said that he will continue to do his work although he does not enjoy the support of some government officials.

According to him, very few politicians supported President Akufo-Addo’s plan to create the office, and so such persons have not accorded him the necessary support in the discharge of his duty.

Speaking to Citi News’ Umaru Sanda Amadu and Mabel Aku Banesseh of the Daily Graphic in Accra, Martin Amidu said “some of them do not like this office to exist.”

Martin Amidu’s appointment as Special Prosecutor by President Akufo-Addo in January 2018, was received positively by many Ghanaians due to the former’s public reputation as a man with a no-nonsense stance on corruption.

That notwithstanding, some politicians within the governing New Patriotic Party (NPP) and those in the opposition National Democratic Congress (NDC) which Mr. Amidu previously belonged to, expressed their misgivings over the creation of the office and the appointment of Martin Amidu as the Special Prosecutor.

In February 2018, a former Attorney General in the NDC government, Dominic Ayine dragged Martin Amidu to court, challenging his appointment as Special Prosecutor.

In Dr. Ayine’s lawsuit, he contended that Mr. Amidu, being 66 years of age, is too old to hold public office, under which the Special Prosecutor’s position falls.

He argued in his writ that, “any other interpretation would result in an unlawful amendment of Article 199 of the Constitution by legislation.”

But Martin Amidu said until a determination is made on the case to the effect that he does not qualify to occupy the office, he will continue to discharge his duty with or without the support of state officials.

The Office of the Special Prosecutor is the idea of the President. Those who support him in this are very few from both divides. I have said time without number, that even those within his government, some of them do not like this office to exist. As for the NDC people, some have said outwardly that my presence here is not in their interest. I’m in the Supreme Court [over this] It is no secret. I am quite prepared to move out of here any day the Supreme Court decides. But before then, I will do my work because the president has figured out that I can help him.”

Martin Amidu’s mandate is to investigate and prosecute cases of alleged corruption under the Public Procurement Act 203 Act 63, and other corruption-related offenses implicating public officers, political office holders and their accomplices in the public sector.

He was also empowered to trace and recover proceeds of corruption, leaving many with high expectations of his office, especially as there had been numerous allegations of corruption within the previous National Democratic Congress (NDC) government, many of which were leveled against them by the New Patriotic Party (NPP) led by Nana Akufo-Addo, who is now President.

Mr. Amidu, who had been complaining about lack of resources for his office, is yet to prosecute a single case as it took the government a while in providing resources and the necessary legislation to get him to work.

Office of Special Prosecutor gets Ghc180m to fight corruption

Government in the 2018 budget statement, allocated an amount of Gh¢180 million to the Office of the Special Prosecutor to enable him function effectively.

“In line with Government’s promise to protect the public purse, His Excellency the President remains committed to the fight against corruption. In this budget, the Special Prosecutor’s Office has been allocated an amount of GH¢180 million from GoG with a commitment to provide additional resources during the course of 2019 to enable the Special Prosecutor’s Office to carry out its mandate.”

Only 36% of sexually active SHS students use a condom - Research

Tue Jan 15 , 2019
A study by the Kwame Nkrumah University of Science and Technology reveals only 36.7% of sexually-active second-cycle students use condoms. The School of Medical Sciences and Public Health also found fewer of them know about sexually transmitted diseases, other than gonorrhea and syphilis. The research team was led by Dr. […] 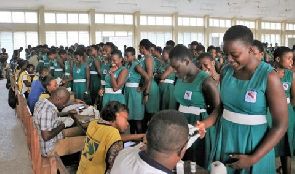