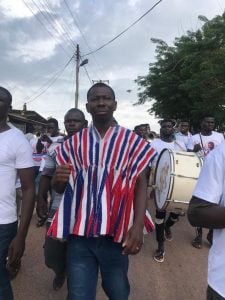 The more we increase the active participation and partnership with young people, the better we serve them. … And the more comprehensively we work with them as service partners, the more we increase our public value to the entire community.” — Carmen Martinez
In the heat of the NPP primaries there is a young man who is one of the contestants for the Amenfi West Primaries. This young man in the person of Dr. Joseph Kwadwo Danquah is an old student of one of the the prestigious secondary school (Asankrangwa senior High School) in the constituency, proceeded to Pong-Tamale Agriculture College in Tamale and then to the University for Development studies (UDS)where his political career started, he rose to be the Vice President (Two terms) of TESCON a student political group of the NPP, he then had his national service at the Office of the President in 2008. In 2010, he gained an admission to the University of Bradford United Kingdom where he did his Masters degree and eventual his PhD in human resource development, he is currently a HRM lecturer in the University of Bradford UK, the youngest PhD holder is fast gaining some serious support from both the youth and elders in the constituency who believe that the depth of his knowledge, experience and exposure will go a long to helping the constituency, the excited constituents that thinks he is the right person picked up his nomination forms amidst joy and celebration, he is fondly refereed to as Wassa Obama as his knowledge, zeal, enthusiasm, and love for his people is compared to the former president of the United State of America. This young man is ready and prepared to serve his constituent and the development of the people is his utmost priority, the Amenfi West constituency NPP will surely be making a great choice if they vote for this young man to represent them, he’s their sure bet for winning power from the NDC who are currently represented in Parliament. As the saying goes, a harvest plantain can never bear fruit again. The juvenile sucker beside the parent plant has to replace the mother plant.

Dr Danquah is much more than being a farmer… he is out to help people and make this little part of the world farm- able and productive, make his little street or block a better place, make the world healthier.