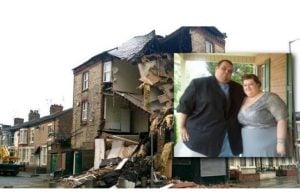 A 640-lbs man and his 450-lbs wife had a rather unusual accident Tuesday night as the floor of their apartment collapsed during a particularly intense sexual intercourse, causing the couple to fall three stories lower.

Michael Davis and Theresa Walker from Liverpool were having sex in their bedroom on the third floor of an apartment building when the structure collapsed.

The couple and their bed fell through three floors before bursting through a wall and ending up in a laundry room in the basement of the building.

Emergency services were rapidly called on the site and they were able to extract the unlucky lovers from their uncomfortable position.

Miraculously, the couple suffered only light injuries and no other residents of the building were injured as almost half of the 250-year old building collapsed.

Tom Watson, another resident of the building, claims the accident was predictable and could have been avoided. 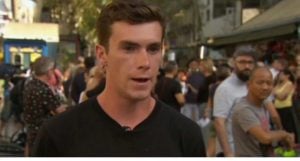 “This couple had very loud sex a few times a week and the entire structure would shake every time. The walls cracked and the light flickered. This is an old building, it clearly wasn’t built to endure this kind of stress!”

Mr Watson says the landlord was aware of the situation but did nothing to correct it.

“He said the fact that they were overweight didn’t justify their expulsion and he offered to build an additional support beam in my living room. Even if the rent is cheap, most of the other tenants had already left because the situation was unbearable”

Indeed, the two apartments below the couple have been unoccupied for months, a fact that explains the absence of casualties.

Mr. Watson, another resident of the building, says the collapse was unavoidable.

Tom Watson, who also resided in the building before the accident, says the collapse could have been avoided.

The Liverpool City Police has opened an investigation and some forensic engineers have been called to the site to determine the exact cause of the collapse.

Depending on the conclusions of the investigation, the landlord could possibly face criminal accusations of criminal negligence causing physical harm.

I know Adam and Eve; I've seen them before - Obinim

Wed Sep 26 , 2018
Bishop Daniel Obinim who is the founder and leader of International Godsway Ministries has been classified by some section of Ghanaians as fake due to the weird miracles he performs in his church and his shocking revelations. He is counted among the controversial pastors in Ghana for his actions and […]