OBUASI ASHANTI GOLD SC HAVE CLINCHED THE MAIDEN EDITION OF THE B.K EDUSEI CUP AFTER WHIPPING THEIR REGIONAL RIVALS 4-3 ON PENALTIES. 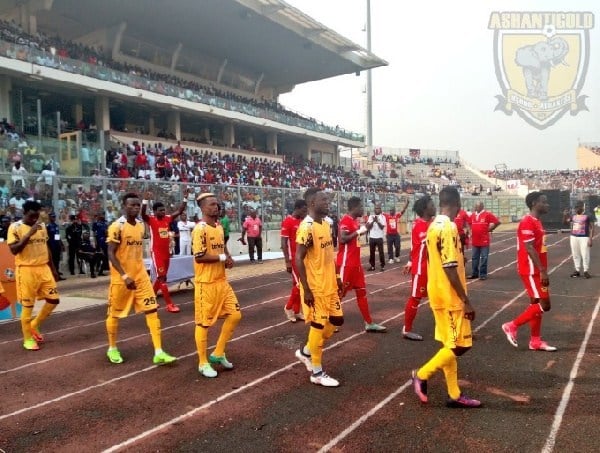 Obuasi Ashanti Gold SC have clinched the maiden edition of the B.K Edusei Cup after whipping their regional rivals 4-3 on penalties.

4-3 on penalty shootouts after a 0-0 draw with Ashanti Gold SC at the Baba Yara Sports Stadium on Sunday afternoon.

The Miners made an early substitution as Musah Mohammed replaced Richard Osei Agyemang who picked up a knock on the third minute.

Ashanti Gold dominated the game in the early minutes as Amos Addai and Shafiu Mumuni strikes were blocked by the Porcupine Warriors defenders.

The home side gained possession to mount pressure on their regional rivals as Kelvin Andoh and Richard Arthur kept tormenting the back line of Ashanti Gold SC.

Kotoko nearly fired the opener on the half-hour mark through Richard Arthur but his audacious strike went wide.

The last fifteen minutes of the match looked balance as both sides distributed brilliant passes which earned them applauds from the fans.

On the stroke of halftime, Midfield dynamo Justice Blay could have snatched lead for the Porcupine Warriors but his shot was fisted out by goalkeeper Frank Boateng.

Back from the break, Asante Kotoko continued to their brilliant performance as they piled much pressure on the visitors.

The introduction of youngster Emmanuel Owusu, David Abagna and Amos Frimpong helped the Miners to intensify the pressure on Kotoko.

Nkrumah’s first touch nearly earned his side the opener on the 75th minute but his thunderbolt went wide.

The two teams could be found guilty for squandering the numerous chances and set-pieces awarded to them as the regulation time ended in a scoreless draw.