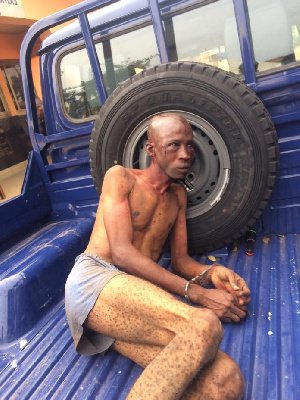 Just five days after the rescue of two Canadians from the hands of Nigerian and Ghanaian kidnappers, another Nigerian, Ibrahim Azamal was arrested for allegedly attempting to snatch a 4 year old boy from around Mamobi Polyclinic in Accra.

The story was heavily reported in the country as it seemed to be part of a trend of ever greater numbers of stories of horrific kidnappings and many Ghanaians were growing increasingly frustrated at the seeming lack of response from the government.

This frustration is not ungrounded as while this attempted kidnapping occured, the Police were still carrying out a manhunt for three Nigerians linked to the kidnapping of the Consular-General and Head of Mission of Estonia to Ghana, Nabil Makram Basbous.

The kidnapping of the three Takoradi girls: Priscilla Bentum, Priscilla Mantebea Koranchie and Ruth Love Quayson who were kidnapped in 2018 has still not been resolved satisfactorily either.

The angry mob subjected Azamal to a severe beating before taking him to the nearest police station, Kotobabi Police Station.

But three months after the incident, a follow up by The Chronicle has revealed that the suspected kidnapper, Ibrahim Azamal, wasn’t involved at all.

In an interview the investigator, who worked on the case at the Nima Divisional headquarters, where the case was later transferred to, told the The Chronicle that when the parties involved in the issue were called on to tell their sides of the story, it became apparent that Azamal had been falsely accused.

Relating his findings, the investigator said that Azamal is a man with a heart problem who usually buys garlic from a trader in the neighborhood to alleviate his symptoms.

He explained that Azamal was reported to have been making advances towards a 12 year old lady who usually serves him whenever he goes to buy the garlic.

On that fateful Sunday morning, he was reported to have gone to the house to buy garlic, but ran away because the mother of the 12 year old was angry at the fact that the suspect had been making advances at her daughter and was yelling on top of her voice, he said.

He continued that Azamal sensing danger took to his heels. After getting to the Zongo junction where the beatings started, it was reported some youth were about lynching the witness in the case who made the allegations but the witness rather pointed fingers at Azamal as being a kidnapper.

The Anti-Human Trafficking Unit at the Police headquarters also confirmed the story when The Chronicle visited them.

Mr Davis Oteng- Berchie, who spoke to this reporter, indicated that though investigations have not been concluded yet, the information gathered so far point to the fact that Azamal was falsely accused.

He claimed to understand the frustrations of Ghanaians and why they pounced on him(suspect), but he also made a plea for Ghanaians to cross-check issues well before taking the law into their own hands

What if this guy had died due to the beatings that were meted out to him, who would have been responsible for it?” he asked.

However, Mr Imurana Iddrisu, father of young Abdul Rahman Sudais, who spoke to The Chronicle indicated that he was torn between the account of the witness and the police investigations.

He said that though he had heard the side of the garlic trader, the witness also pointed to the fact that it might be that the suspect took young Abdul Rahman Sudais to the garlic vendor and had wanted to lure the 12-year-old girl along.

He said that if the police at the CID headquarters had given the prime witness a chance to tell his side of the story, the truth would have been uncovered and all doubts would have been cleared.

He went on to say that while seeking to unearth truth in an issue as crucial as child stealing, the police should be willing to pay for the transportation of a prime witness to allow them the opportunity to tell their side of the story.

‘I was an idiot, I bought three cars in one day’ – Kevin-Prince Boateng